Dr Theodora A Christou, Called to the Bar at Lincoln’s Inn (Barrister) 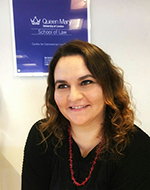 Convenor of Transnational Law and Governance

Theodora is Convenor of Transnational Law and Governance at the Centre for Commercial Law Studies of the School of Law. She developed this innovative and unique modules with the support of her guest lecturers, thereby ensuring that the modules are relevant to all legal specialisms. In Semester One, students learn how the state has lost its monopoly in law-making, the theory and realities that support the proposition that there is a plurality of sources including private actors; formation and enforcement of Transnational law, as well as its impact at national level. In Semester Two, guest lecturers from practice and industry, provide students with a practical insight into how law is really made.

She also teaches an Introduction to Law for Engineering and Science for the SEMS Department at Queen Mary and co-convenes International Human Rights Law at London School of Economics. She taught Criminal Law at QMUL (2009-12,1014/15) and was course convenor of the LLM module on International Protection of Human Rights at the University of Surrey (2015) and was also course convenor of the 'Forced Migration and Human Rights' unit on the MSc Refugee Studies at London South Bank University (2007-2010).

She is a consultant primarily on Human Rights, but also on Transnational Law and Governance, CSR, EU law, rule of law, international law, transitional justice, the link between human rights and commercial law, energy and natural resources law, legal reform, The Commonwealth, and the law’s response to globalisation.

As a consultant she has worked on cases before national, regional and international bodies and courts, conducted research, design and implementation of training (including the production of material and manuals) in over 20 countries, has consulted on legal reform, capacity building, litigation, policy development and transitional justice programmes in over 80 jurisdictions.

She is an elected member of the Executive of the Bar Human Rights Committee where she has worked on a number of projects concerning violence against women, fair trials, trial observations, prohibition of torture, elections, right to life, arbitrary detention, assassination attempts, freedom of expression.

As a Consultant at The AIRE Centre Theodora advised in over 200 cases covering EU law issues and Human Rights. Landmark cases include: A and others [2005] UKHL 71; Al-Skeini and others [2007] UKHL 26; R (on the application of Baiai and others) [2008] UKHL 53; Behrami v France; Saramati v France, Germany and Norway ECtHR [GC]; Chagos Islanders v UK ECtHR.

She has also worked in house at an IT Company working on rule of law, Climate Change projects, and data protection, running with the former General Counsel the Open Computing Alliance, she continues to produce regulatory reports for the Telecoms company. She was previously a Research Fellow at the British Institute of International and Comparative Law (BIICL) working on issues ranging from Counter-Terrorism Laws, Human Rights, Telecommunications Regulation, Commonwealth Legal Advisory Service, Data Protection. She was awarded the Peter Duffy Human Rights Award by Lincoln’s Inn and worked for 3 months at the European Court of Human Rights under the supervision of Sir Nicolas Bratza.

Theodora has given expert evidence in a number of consultations, including: to the Home Office and Ministry of Justice Review of the Balance of EU Competence in Criminal Matters; to the UK Parliamentary Inquiry on Female Genital Mutilation (which led to the change in law introducing FGM Protection Orders); to the UK Parliamentary Inquiry on Violence Against Women; the Africa Justice Foundation, on The Rule of Law within the Post-2015 SDG Agenda; European Commission Consultation, A Green Paper on the application of EU criminal justice legislation in the field of detention; Comments on the Commission’s Public Consultation on ‘Post-i2010: priorities for a new strategy for European information society (2010-2015)’

Her varied research interests, evident in her work, stem from her personal working experience at BIICL, The AIRE Centre and other organisations and companies where she developed an expertise in the ability to immerse herself in a new topic and to conduct detailed research in any legal expertise.

Theodora’s current interests include Transnational Law and Governance, in effect how the law responds to the irritations of globalisation, such as innovations in IT, economic power shifts, new ways of conducting business. Her interest is in particular on non-state law-making by private actors and private institutions, including law in the digitalised economy (the impact of technology on legal innovation).

She continues to lend her expertise in International Human Rights Law to numerous consultancy projects.