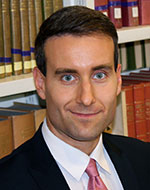 Dr Jancic has also taught and/or carried out research as a Visiting Scholar at Renmin University of China Law School (2018), the School of Leadership at the University of Johannesburg (2016), the Max Planck Institute for Comparative Public Law and International Law in Heidelberg (2011-2012), Jean Monnet Centre of Excellence of the University of Lisbon (2010), LSE Law Department (2009), and the Centre for European Studies of Sciences Po Paris (2009).

In 2019, Dr Jancic was appointed Academic Fellow of the Honourable Society of the Inner Temple and in 2018 he won the Teacher of the Year Award at Queen Mary University of London. In 2011, Dr Jancic won the Europe Award from the Montesquieu Institute, The Hague, for the best article in the area of European studies. He also frequently participates in public engagement and policy-related consultancy. From 2014-2016, Dr Jancic acted as a Guest Co-Editor of The Hague Journal of Diplomacy for a Special Issue on parliamentary diplomacy. He also acted as editor of two volumes, one on national parliaments after the Lisbon Treaty and the euro crisis (OUP 2017) and another on parliamentary diplomacy in European and global governance (Brill 2017).

Dr Jancic has so far taught the following modules:

Please get in touch at d.jancic@qmul.ac.uk to discuss your ideas.