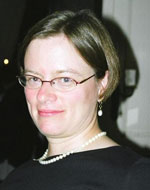 Professor Julia Hörnle has held the Chair of Internet Law at the Centre for Commercial Law Studies at Queen Mary, University of London since 2013.

Her research areas are Cyberspace Law & Digital Rights, Internet Regulation, Jurisdiction of States Online and Online Dispute Resolution. She examines from a critical-analytical perspective the law related to the internet, cloud computing, social media and artificial intelligence. Recent research focuses on the regulation of social media, the liability of intermediaries for user-generated content, and the use of artificial intelligence for content moderation online.

Professor Hörnle has chartered the jurisdictional challenges of the internet in her ground-breaking new book published by Oxford University Press in February 2021: Internet Jurisdiction Law & Practice.

Professor Hörnle’s research has been impactful: the research on ODR led to impact on the UK government, UNCITRAL, the Council of Europe (European Committee on Legal Co-operation (CDCJ)) and the European Commission on ODR, leading to a Directive on ADR and a Regulation on ODR. The ODR Research was submitted as an Impact Case Study in the REF 2014 receiving the highest impact score (4*).

Her book Cross-border Online Gambling Law & Practice (Edward Elgar 2010) and subsequent research on the regulation of online gambling has led to a 2018 European Commission Study leading to her Impact Case Study for the REF 2021.

She was a non-executive Director of the Authority for TV on Demand (ATVOD) 2010-2014 applying critical and sound judgment to questions on how to regulate online pornography.

She was an Expert in the Committee of Intermediary & Platform Liability of the Media & Internet Division of the Council of Europe (2016-18) producing a Study on AI and a Council of Ministers Recommendation on hateful speech online. In a separate Council of Europe project (2015-2019) she has led three researchers producing a Technical Study on Online Dispute Resolution.

Professor Hörnle has acted as principal investigator in a number of publicly funded research projects managing a number of researchers. Most recently for the European Commission, leading a team of five researchers producing a multi-disciplinary Study on the challenges of enforcing national gambling regulation in the EU and EEA States, focusing on internet access blocking, payment blocking, advertising regulation and sanctions and advising a number of gambling regulators across the EU on enforcement issues. The quality of the research resulted in an invitation to the House of Lords Select Committee on the Social and Economic Impact of the Gambling Industry to give oral and written evidence (2019).

She was an invited expert on ODR to the United Nations Commission on International Trade Law for the Working Group III, at the Inaugural Session in Vienna 2010 and New York, 24-28 March 2014. In 2014-2015 she acted as member of the Advisory Group on Online Dispute Resolution of the English Court Service’s Civil Justice Council.