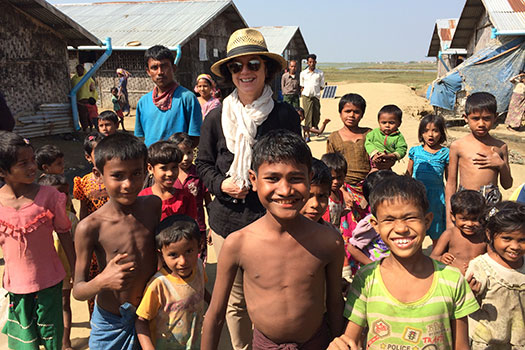 In 2009, the International State Crime Initiative (ISCI) was set up by Professor Penny Green with Dr Tom MacManus and Professor Tony Ward. ISCI is a cross-disciplinary research centre comprising a community of scholars working to further our understanding of state crime. The Initiative’s focus is on victims as key actors in defining, exposing and challenging state violence and corruption.

Professor Penny Green, Co-Director of ISCI and Head of the School of Law at Queen Mary, tells us about the impact of the team’s research on the Rohingya genocide in Myanmar.

We were in Myanmar in 2012 conducting fieldwork into civil society activists who had organised against the repressive rule of successive Burmese military regimes. It was on that trip that we met a group of Rohingya activists who described appalling conditions of arbitrary detention, forced disappearance, rape and state violence in Northern Rakhine State. Back in London we immediately applied for and were successful in securing an ESRC urgency grant to return to Myanmar to explore the question of whether the persecution of the Rohingya was in fact genocide. We then conducted four months of research primarily in Rakhine state but also in Yangon and wrote our first report, Countdown to Annhilation: Genocide in Myanmar which categorically argued that the Myanmar state was perpetrating genocide against the Muslim Rohingya.

With the terrifying conclusion of the genocide in August 2017 we returned to the region – this time to the makeshift refugee camps in Bangladesh’s Cox’s Bazar where over 800,000 Rohingya had fled. Our fieldwork there led to the publication of Genocide achieved, Genocide Continues: Myanmar’s Annihilation of the Rohingya.

The fieldwork on both trips was challenging and of course harrowing, particularly in the camps. In our work we confront both victims and perpetrators and in both situations controlling one’s emotions is both difficult but essential. Working in a repressive state like Myanmar means that much of what we do must take place under the radar – particularly when the criminal state is the subject of your inquiry. We were followed on occasion and had to rely on a range of fixers and translators who were not always ideal. The necessity of a great team and the support and solidarity that ISCI provides us all when conducting this kind of research cannot be underestimated.

What are some of the key findings from the two reports ISCI has produced on the Rohingya genocide?

It was clear to us as scholars that what we had witnessed was genocide. Unfortunately and unsurprisingly, it was not an analysis that those in power (including both the Myanmar and British Government) were prepared to accept – instead we had to wait and witness what we had predicted as inevitable, but, with international political and economic intervention, may have been prevented.

In terms of key findings, the main ones are: Genocide is a process – one which often takes place over many years; moving from stigmatising and dehumanising state practices which erode the rights of the target group through social and physical isolation to systematic weakening (as we saw in the camps), mass violence and the ultimate reorganisation and reconstruction of society in the absence of the victim group. This understanding of genocide means that, given political will and civil society preparedness, interventions can be made long before mass state violence takes place. Genocide is very often a process of attrition and not always characterised by immediate and discrete moments of spectacular mass violence.

The most demoralising lesson, however, is that while research teams like ours can demonstrate the existence of genocide it has proven neither politically nor economically expedient for governments or the United Nations to call it out. There is absolutely no value waiting for international courts to intervene – they only ever enter the scene after the genocide is over and even then have no powers of enforcement. Myanmar has been allowed to get away with genocide.

To find out more about the ground-breaking research the ISCI team are undertaking visit statecrime.org