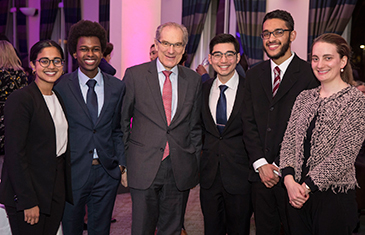 After months of fierce Competition, the George Hinde Moot competition came to a close on 21 March, with Ashwatha Venkatrajulu declared the winner! She was joined in the final by Augustine Tang Jing Cheng, Stephen Kamau Karori and Hussain Syed who also gave exceptional performances.

Ashwatha was also awarded The Yeats and Lane trophy for Fresher who went the furthest in the mooting competition.

The final was judged this year by Deputy President of The Supreme Court, The Right Hon the Lord Mance.

The competition – organised by students and academics at the School of Law – has been established for more than 40 years and provides undergraduate students with ‘real-world experience’ as well as an invaluable insight into advocacy and the Bar. Participants are expected to present and defend legal arguments under court room conditions.