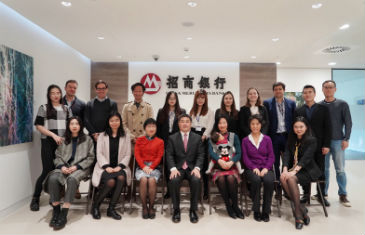 On Monday 19th November, the second CCLS Commercial Law in China Series event of the year was held at the China Merchants Bank London Branch (CMBL) and saw 20 LLMs, PhDs and Visiting Academic from different specialisms. The series, launched by the CCLS in 2016, covers issues in the field of Chinese commerce law that are of interest to UK/EU and China, and features in-depth discussions among both established and up-and-coming academics and high-profile practitioners.

Chaired by Dr Guan H Tang, the Monday event was tailored for the LLM participants with the theme of ‘Innovation and Banking at the Crossroad’, which consisted of two talks focused on laws and regulations of banking in a post-Brexit era, following the proposed changes of Bank of England and UK financial regulators (Prudential Regulation Authority and Financial Conduct Authority), from the perspective of a Chinese bank operating in the oversea territory.

The first talk, entitled ‘The Effects of Technological Advance on Banking Operations’, was delivered by Mr. Kang Pan, the General Manager of the CMBL. Opened with an examination of the diverse businesses and leading strategy of the CMBL, particularly its endeavour of creating a non-financial high-end supplying platform in the London financial hub, Mr. Pan analysed the important and close ties between law, technology and governance in the finance sector. He pointed out that customers’ financial and non-financial digital ecosystem would be highly leveraged in banking, and concluded that the future of the banking ecosystem would look much different than today and would extend well beyond financial services.

Subsequently, Ms. Tianyu Zhang, the Compliance Officer of the CMBL, reviewed various aspects of laws regarding the CMBL’s operation in the UK. She started her talk with a brief overview of relevant legal affairs involved in daily banking activities and highlighted the role of legal departments within. Introducing the unique collaborative mode of banking operation between the CMBL and the CMB Mainland China, Ms. Zhang stressed the importance of legal compliance in practice.

In the following Q&A session, the CCLS participants commented on the two interesting talks and raised numerous questions, in relation to alternative banking, innovation and IP, data protection, cooperate governance and IT law. Mr. Pan and Ms. Zhang answered most of the questions and promised to resume the discussion online. The event accomplished with a group photo, showing the content participants and the youngest commercial law listener.