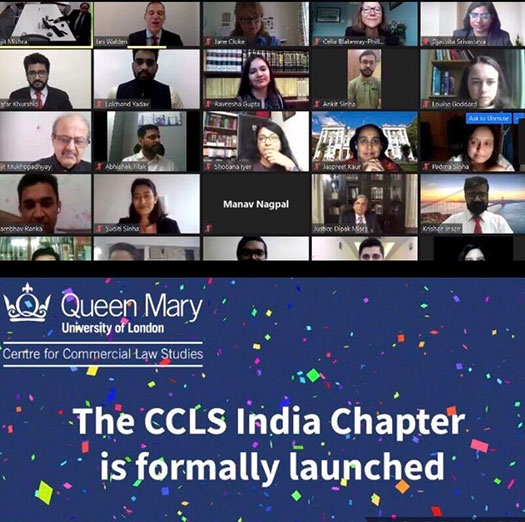 The India Chapter has emerged as one the fastest growing Chapters in its inaugural year. The challenging Covid times did not impact the vision of its committee members. The committee has invited numerous well-renowned lawyers, Queen’s Counsels, academics, and dignitaries for its events and had some engaging sessions on meaningful topics. Webinars included “Medication and Art of War”, ‘'The Law of Sedition: Time to Oust an Outdated Law' and 'Working in law: private practice vs in-house'.

The CCLS alumni in India are actively involved in the Chapter activities and form an integral part of the CCLS community. This network of lawyers, academics, and professionals have been joined together as they have two things in common – India and CCLS, creating a strong sense of belonging.

The Chapter is led by Mr Ajit Mishra, who has been extremely active in creating and growing the Chapter. He is supported by a committee of nine members.

The committee has brought together over 400 CCLS alumni via its LinkedIn Group. The committee has always been committed to cater the needs of the diverse group and the eight events that were organised have been on various topics, ranging from Corporate and Commercial Law to Environmental Law, In-House Practice, Law Firm practice, events for new graduates and academicians. As part of the mix of activities, there have been some social events organised.

The official launch of the CCLS India Chapter was special as the Former Chief Justice of India, Mr Dipak Misra attended, and it coincided with the Constitution Day of India.

On 26 November 2021, the community celebrated the first anniversary of the Chapter, which was graced again by the presence of Former Chief Justice of India, Mr Dipak Misra. He is now Patron of the Chapter.

Due to the pandemic, most of the events were held online, however, in June the committee Chair, Ajit held informal drinks in London for CCLS Indian alumni based in London.

The committee have received great feedback from speakers and their audiences about the content and quality of the online events that they organised. With such a huge CCLS network across India, the Chapter has also created a sub-Chapter in the financial capital of India, Mumbai and committee members will help in organising physical events in and around Mumbai. There is great enthusiasm from the committee to hold physical events in 2022.