Suchita obtained her BSc in Biomedical Science at King’s College London. She then went on to obtain her PhD at University College London, under the supervision of Profs Michael Ehrenstein and Claudia Mauri, where she investigated the role of regulatory T-cells in anti-TNF-treated rheumatoid arthritis patients. Following a brief post-doc in New York, Suchita left lab-based research for a year to work as a Senior Science Adviser to the Government. In 2009, she then returned to lab research, undertaking post-doc project with Prof Mauro Perretti at the WHRI looking into the role of neutrophils in patients with Giant Cell Arteritis. It was during this time that Suchita developed her interests in neutrophils, combining it with her background in T-cell immunology. In 2013 Suchita joined Prof Federica Marelli-Berg’s group, where she developed her niche investigating the importance of neutrophil-T cell interactions during pregnancy. In 2017 Suchita was awarded a 5-year intermediate research fellowship from the British Heart Foundation.

Suchita’s work focuses on the role of the maternal immune system in shaping pregnancy outcomes. Suchita is specifically interested in how maternal neutrophils can influence T-cell responses and how such interactions can regulate placental development (see image) and her main disease area of interest is pre-eclampsia In addition to their roles in placental development, Suchita is also interested in how neutrophil-T cell interactions can influence maternal cardiovascular responses during pregnancy and fetal development. 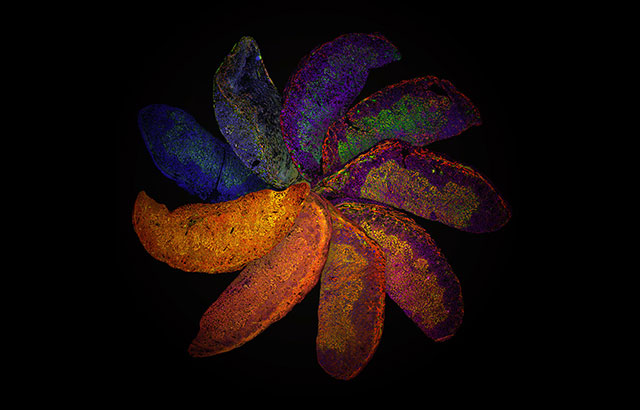 Using wide-field confocal scanning microscopy, The Placenta Rainbow, depicts 9 different mouse placentas that have been individually imaged and arranged in PhotoShop.  Each placenta derives from a distinct mouse pregnancy in which the mother’s immune system has been manipulated to assess the architecture of the placentas. Following extraction, the placentas are labelled with different coloured antibodies that bind to specific proteins.  The varying colours denotes specific structures within the placenta and allows us to assess whether manipulation of the mother’s immune system affects development of the placenta.  Such assessments could help identify targets for complications arising in human pregnancies.

March 2017
The Wellcome image awards 2017: the shortlist of the years best science visions (The Observer)