I have a degree in Chemistry from Washington University in St. Louis, USA and a PhD in Biochemistry and Biophysics from Texas A&M University, USA. In Texas I performed my graduate work in the lab of Arthur E. Johnson. We used a novel in vitro approach that incorporated a labelled lysyl-tRNA into a growing nascent polypeptide. This approach led to a seminal understanding that the pore through which all membrane proteins pass, plays an active role in membrane protein biogenesis. This work was followed by a study that was the first demonstration that transmembrane regions begin to form within the tunnel of the ribosome.

For my post-doctoral work I worked in the lab of Juan Bonifacino at the National Institutes of Health (USA). We answered a long-standing question in the field of immunology about what path the MHC II molecules take to reach the antigen containing compartments. I then moved to the National Cancer Institute where I began working on G-protein coupled receptors (GPCRs), one of the most important drug targets. After I moved to the University of Barcelona where I started my independent career looking at how GPCRs interact. In 2013 I relocated to the UK, starting at the University of East Anglia followed by the University of Surrey prior to moving to the William Harvey Research Institute in 2018.

When I took over my own lab I began studying the phenomenon of heterodimerization between families of GPCRs. Heterodimers between GPCRs is a phenomenon discovered in the last decade. However, the molecular details of how this occurs and specific examples in biology of where and how heterodimers function is sparse. My work in this area has been published in PNAS, JBC, Journal of Neuroscience, PLoS Biology and Molecular Psychiatry. My lab continues to work on GPCRs including, dimerization, allosteric interactions, and their role in a variety of pathologies with an eye for new opportunities for drug therapy.

The G-protein-receptor (GPCR) superfamily is subdivided in six classes (A to F). These receptors represent important drug targets, with ~30% of all drugs in the clinic targeting a GPCR. It is clear from structural data that GPCRs are not single on/off switches but instead have different ligand-modulated signalling states, and that higher-order oligomers are important for activity. Our own work has shown that these oligomers (homo and heteromers)  have the potential to significantly alter downstream signalling pathways.  However, how this is achieved will vary for the partner and most likely the physiological setting (expression levels, cell and tissue type, etc..). Our work and others have demonstrated that the consequences of protein-protein interactions between receptors can be allosteric in nature, or via altered trafficking.  Future research will be focused on achieving a full understanding of these intricate protein complexes, their role in physiology and disease, and ultimately how to manipulate them for therapeutic interventions. 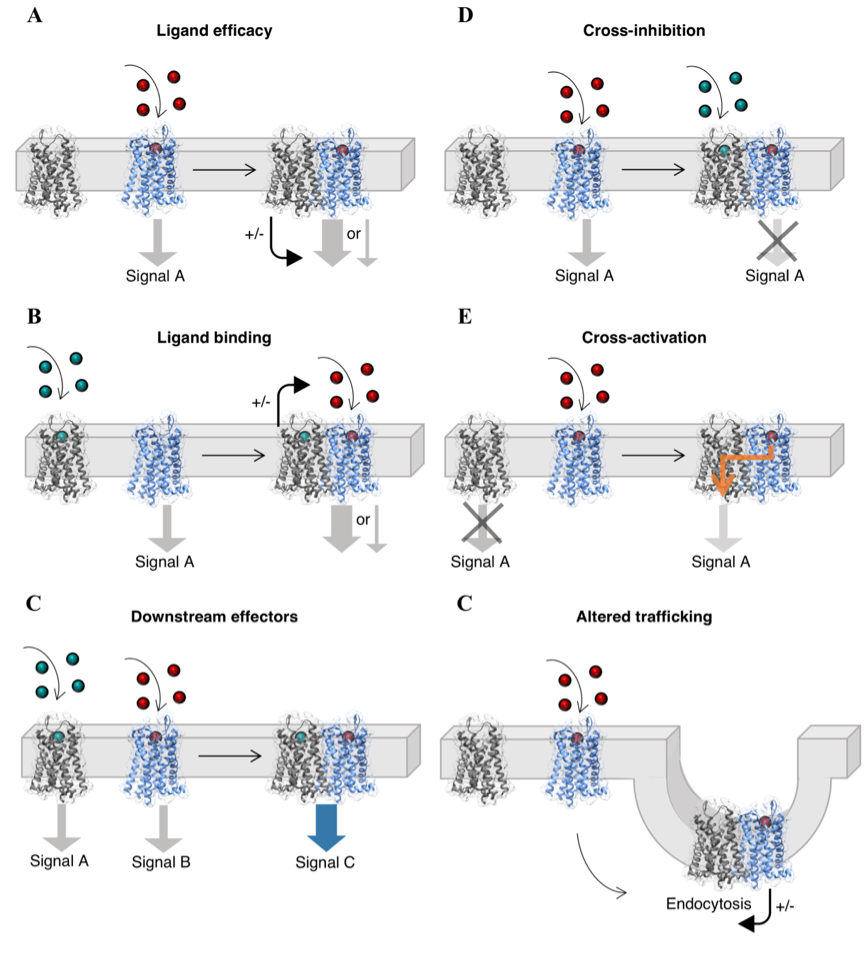 Functional consequences of GPCR oligomerisation. Schematic representation of the main cellular effects upon receptor dimerization. Otherwise stated, the responses after the interaction with the second protomer (in blue) can be extended to both homo- and heteromers. (A) The interaction with a second protomer (non-liganded) can lead to increased/reduced efficacy after ligand stimulation. Similarly, cooperativity often takes place at the level of ligand binding (B), when a molecule binding to one protomer increases/decreases the affinity of a second ligand targeting the neighbouring receptor. This if often translated into altered signalling efficacy. Frequently, oligomerisation provides new conformational opportunities to engage different downstream signalling pathways from those of the individual receptors (C). In the case of heteromers, cross-inhibition (D) has been extensively reported and refers to the ability of an agonist (negative cross-talk) or antagonist (cross-antagonism) targeting one protomer to inhibit the agonist-driven actions of its interacting partner. Cross-activation (E) is another mechanism by which oligomerisation diversify GPCRs. This applies to homomers (e.g. rescue of function after the co-expression of chimeric constructs) and heteromers (e.g. activation of the cognate downstream pathway of one protomer when agonising the other). In addition, oligomerisation can also modulate receptor trafficking (F).

One of the major challenges to creating new drugs is reducing side effects and increasing the efficiency of a new drug.  One way this can be achieved is by identifying new places on where to have your drug attach.  This new region can be on an already known drug target or on a completely new one.  These alternative drug sites, termed allosteric sites, act as rheostats, where they are able to turn down or turn up the bodies response.  Once a location is identified, then rheostat molecules can be developed as new drugs.  My lab works on identifying new sites for future such future molecules.  Our work is on both known drug targets as well as on new drug targets.  We currently are working on such sites for the treatment of obesity, neurodegenerative diseases, depression, inflammation after a heart attack and various cancer types. 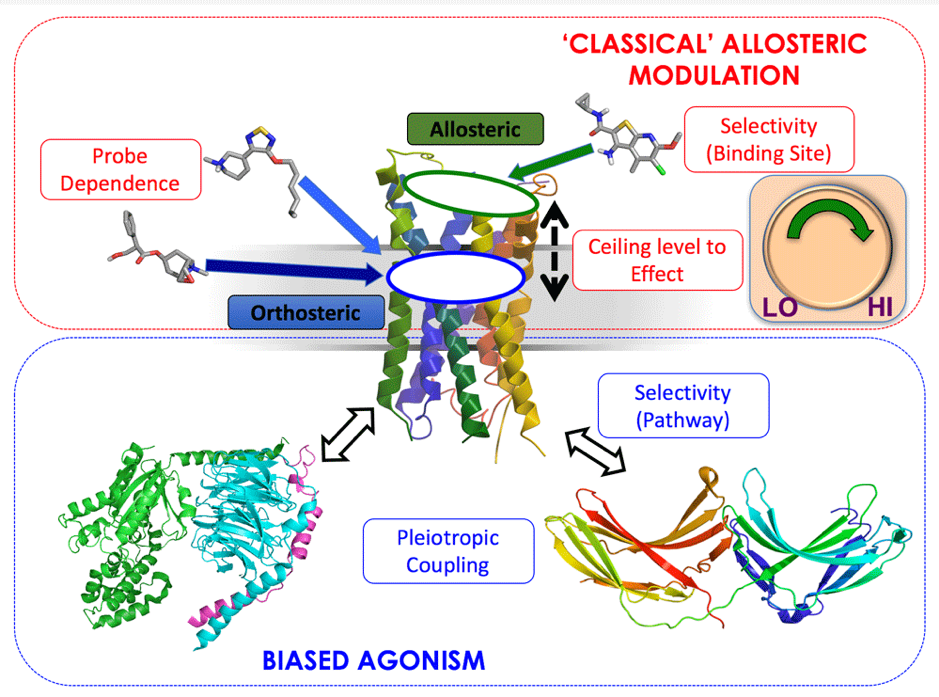 In 2010, according to the WHO, neurological disorders comprised 3%  of the total global burden of disease, with the top four neurological categories, migraine, epilepsy, dementia, and Parkinson's disease, accounting for 72% of the burden. In Europe, the cost of all brain disorders was estimated at €798 billion in 2010 with the global cost of mental health conditions alone estimated at US$ 2.5 trillion, with a projected increase ~US$6 trillion in 2030.  There is thus an urgent need for new biomarkers for detection and therapeutic targets in the development of curative drugs, and not just treating the symptoms. We lead an international consortium that uses stem cells to understand what early changes happen in neurons that might be used as both biomarkers for identifying patients prior to symptoms as well as studying potential points of therapy that may be common or unique to that particular neurodegenerative disease.