For our second guest post of the year, Professor Rüdiger Görner, Director of the Centre for Anglo-German Cultural Relations at Queen Mary University of London (QMUL), has written about an exciting new accession to the Archives - the personal papers of the German born novelist, translator, musician and visual artist Wolfgang Held (1933-2016). 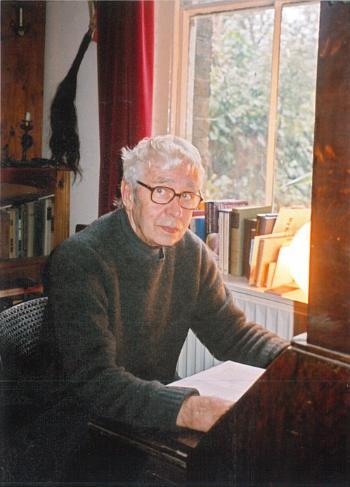 Wolfgang Held was an exceptional homme de lettres and key-figure in Anglo-German literary relations. In 1971 he moved to the UK where he subsequently settled in Lewisham, South East London. His large study covered the entire ground floor of the family house with an adjoining workroom which functioned as his ‘collagerie'. This became his realm, where he created his novels and translations, gave piano recitals and made recordings of works by his favourite composers, and produced his collages and assemblages. The walls were covered with bookshelves containing his extensive library with the numerous portraits of the cultural figures he admired looking down on him and inspiring him.

His study created an Edgar A. Poe-like atmosphere, quite in line with Held's close affinity to Romanticism, in particular to E.T.A. Hoffmann, with whom he shared his striking artistic versatility. At various points the rooms also functioned as the ‘Raven Studio’, either for his piano recordings or as a gallery venue for his own and friend’s exhibitions. After the publication of the Raven Child, the story of his childhood under the Nazi regime, the raven became an iconic emblem for this extraordinary writer and translator of Wyndham Lewis, T.S. Eliot, Samuel Beckett, Michael Holroyd's biography on George Bernhard Shaw and the poetry of John Donne and Emily Brontë. As a novelist he engaged in complex and multi-layered narratives ranging from Die im Glashaus (Those in Glass Houses, 1965) to Rabenkind (Raven Child, 1985), Geschichte der Abgeschnittenen Hand (Tale of the Severed Hand, 1994) and Traum vom Hungerturm (Dream of the Hunger Tower, 2007). He was also the author of a dual biography on Robert and Clara Schumann.

The Centre for Anglo-German Cultural Relations at Queen Mary University of London (QMUL) is privileged in having been donated Wolfgang Held's papers which are now housed in the QMUL Archive in the Library on the Mile End Campus. Together with the Libris Publisher's papers this invaluable collection, which includes important correspondence in relation to Held's translations and other literary works together with his notebooks, manuscripts and drafts, is the basis for a special archival collection in this important field of study. We remain deeply grateful to Madeline and Natasha Held for bestowing upon us this unique resource.