On this page you will find links to our digitised records, offering you the ability to view highlights from the Archives remotely in a digital format.

Follow the links below to explore the digital material and learn more about these collections.

Images from the Archives can also be viewed in the Archive Galleries.

Constance Maynard (1849-1935), first Mistress of Westfield College and pioneer of women's higher education. Maynard helped to established Westfield College and for 31 years assisted hundreds of women to attain University of London degrees. The themes covered in her private papers include women’s education, sexuality, and religion in Victorian and Edwardian England. A full catalogue of the archives of Constance Maynard is available on our catalogue.

Digitised records include her Green Book Diaries and Autobiography.

Prints and artwork dating between the early 16th century - 1968, collected by Westfield College (Ref No: WFD/PRINT). 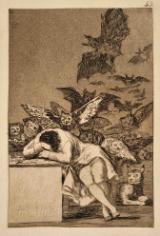 Also includes several anonymous colour prints created by art students in Atelier Popularie [popular studio] in response to the May 1968 student revolution which began in Paris.

Digitised records of the Westfield Print Collection are available through the online catalogue of the collection. Select an item from the drop-down list to view the digitised print.

The People's Palace was a Victorian philanthropic endeavour to provide culture, entertainment and education to the people of East London. The

original People's Palace was established on Mile End Road from 1887 and played an important role in the local community, providing facilities including an entertainments hall, swimming pool, library, tennis courts and Winter Garden.  The People's Palace Technical Schools provided day and evening classes in a range of subjects, and expanded and developed over the years into the present institution.

Digitised records of The Palace Journal, the newspaper of the People's Palace 1887-1894, are available online. The Palace Journal provides a fascinating insight into the role of the organisation in the local community and a snapshot of Victorian culture and society.

Rare film footage is available of Queen Mary over the years. A film of 1974 Rag Week, shows the antics which took place as part of 'Raise and Give', charitable fundraising. RAG still continues today and covers all the Student Union's fundraising activity. Find out more about Rag on their website.

A film of the installation of the first computer at Queen Mary College in 1968 provides an amazing insight into the history of information technology. The college was the first to provide a degree in which computer science was the major field of study.

Records from the institutional archives of Queen Mary College from the First World War are available to view via the Meanings of Military Service website: www.meaningsofservice1914.qmul.ac.uk  The website also includes online exhibitions of images relating to the themes of home front, front line and medicine. It also includes archives from the historic hospitals Royal London and St Bartholomew's.

The 'East London College Magazine' issues from 1914 to 1919 are available to download. The East London College Magazine was produced by students, and continued to be published throughout the war.  Regular features included news from the college, poems, stories, jokes, cartoons, and reports from union societies. But the 'roll of service' became a new regular feature, reporting the fate of fellow students to their friends.

The Roll of Honour for the Great War 1914-1918 is available to download. The Roll of Honour is a record of all the 73 former East London College students who died during war service. As well as their date of death, the roll of honour includes biographical information such as, where they lived and what subjects they studied. For some of those who died there are even testimonials given by fellow students.

Women at Queen Mary is an online resource charting the contribution of women to QMUL and predecessor bodies, Queen Mary College, Westfield College, and the historical medical colleges, St Bartholomew's Hospital Medical College and the London Hospital Medical College.  Drawing on a range of archives, the website includes a thematic tour through history of women at QMUL and biographical information on key figures in history. It also includes audio material including dramatisations of accounts in the archives and interviews with key figures.