New Collection Alert! We recently received a donation of the United Kingdom One World Association and Towns & Development Records.  We are excited to announce it has undergone our initial processing and is ready for researchers to dig into. A collections overview is on our catalogue Ref. OWLTD and a box list is available on request. Read on to find out more about this new addition. 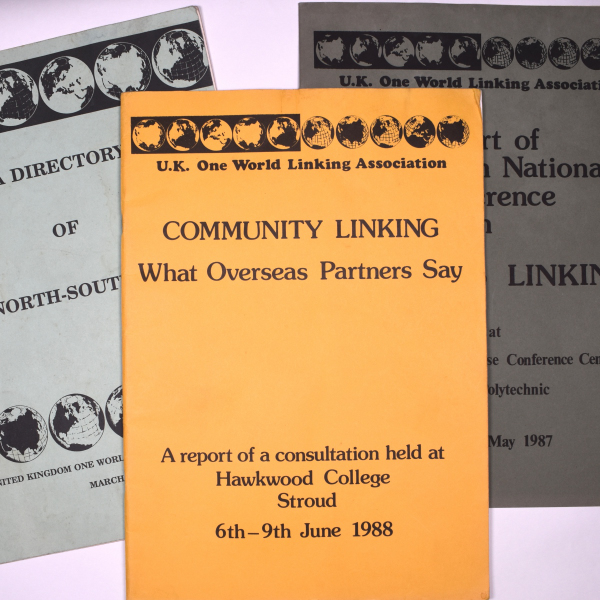 A selection of UKOWLA reports and publications in the collection 1989-1989 [Ref. OWLTD/UKOWLA/publications]

United Kingdom One World Linking Association (UKOWLA, 1983-) is an organisation established as a national advisory body for those involved with “linking” with international communities in the geographical South. UK communities could be paired with communities from the continents of Africa, Asia and South America. The concept became popular in the early 1980s and linking aimed to create partnerships to support education and cultural exchange, for political campaigning and working for justice by understanding the causes of poverty. One of the earliest links was between Bo District in Sierra Leone and Warwick District Council established c 1981 and by 1985 100+ links had been established.

UKOWLA was proposed at the first UK wide conference in 1982 on how to link successfully, how to overcome the obstacles to linking including fighting racism and logistical hurdles. This conference was organised by OXFAM and other non-government organisations (NGOs). At the end of that conference it was agreed to form UKOWLA in order to have a national advisory body. It was confirmed at the second conference in 1983. Members of UKOWLA included Oxfam, European charities and Local Government Associations.

Similar projects and interest in linking in European countries including Germany and the Netherlands also rose in popularity in 1980s with a focus in local councils. UNESCO organised a European conference with local councils and national governments in Florence in 1984. This was followed in 1985 by the first NGO led joint conference for local councils in Cologne. It was here that Towns and Development was founded in 1985. This was supported by the Local Government International Bureau, which assisted UK local authorities over twinning and linking in Europe and worldwide c 1990-. Towns and Development ceased to exist in 2000.

The collection includes UKOWLA records like reports, conference proceedings and the newsletter "One World Linking" and photographs of conferences. It is also includes Towns and Development records including reports, newsletters, leaflets (1985-2000) and photographs of conferences. Along with organisational records the collection has publications, leaflets and papers related to "linking" and related research (1982-2019).

The collection was owned by Jane Knight who was a participant and organiser of UKOWLA and Towns and Development until she generously deposited the collection with Queen Mary University of London Archives in 2021. To get a box list of this collection or to make an appointment to view it email us at archives@qmul.ac.uk and you will find a collection level description on our catalogue here.