Have you ever ventured into the Octagon, which used to be the Queen Mary library, for meetings or lectures and has your eye started wandering around the room? In doing so your gaze may have rested on the gold plated names etched in the base of the dome. These are the names of eight Greek and Roman philosophers and poets that lived in the ancient world, whose works are still read today. This week the focus is on Plato. A series by Special Collections Information Assistant Anne Marie McHarg. 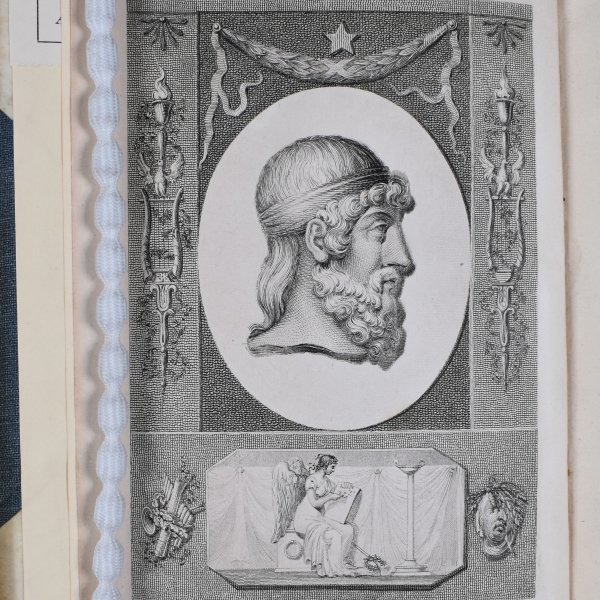 We are not sure about the exact dates of his birth but in their research modern scholars have traced events in his life and believe he may have been born between 424 and 423 BCE. He was born into elite Greek society from an aristocratic lineage; his father, Ariston, descended from the Kings of Athens and Messenia, and his mother, Perictione, is said to have been related to the sixth century Greek statesman, lawmaker and lyric poet, Solon. Plato grew up during the Peloponnesian War when the greatness of Athens was declining.

We have a glimpse from ancient writings describing Plato as a bright, modest child who excelled in his studies. Apuleius also tells us that Speusippus, who was a Greek philosopher as well as being Plato’s nephew, praised Plato for his quickness of mind and modesty and the “first fruits of youth infused with hard work and study”. Plato was instructed in grammar, music and gymnastics. He also studied music under Damon, son of Damonides, a Greek musicologist of the fifth century. He must have thought highly of Damon, as his name is evoked many times in The Republic. The Greek philosopher, Dicaerchus, mentions that Plato took part in the Isthmian games as a wrestler. Plato’s education included philosophy and he would probably have had his own tutor from Athens. His curriculum would include the doctrines of Cratylus and Pythayorus as well as Paramedides. For Plato, this laid the foundations and thinking into metaphysics (the philosophy of existence and the nature of being) and epistemology (the theory of knowledge).

But Plato is best known for being a pupil of the Greek philosopher Socrates. He began to write down the words of Socrates and gave a vivid picture of his life.  Plato also noted that Socrates walked barefoot in the Agora, or marketplace of Athens, and would talk to anyone who would listen. In two of his works, the Apology and Phaedo, you will find the accounts of Socrates’ trial by the Athenians and his death.

Quotation from the Apology:

Men of Athens, I honor and love you: but I shall obey God rather than you, while I have the strength, I shall never cease from practice and teaching of philosophy, exhorting anyone whom I met after any manner and convincing him saying, “Oh my friend, why do you who are a citizen of the great and mighty and wise city of Athens care so much about laying up the greatest amount of money and honor and reputation and so little about wisdom and truth and the greatest improvement of the soul, which you never regard or heard at all? […]

Travelling to Italy and Egypt

Later in life during his middle age and after the death of Socrates, Plato made the sudden decision to travel to the Near East: Egypt, Italy and Cyrene which lies in present day Libya. While in Egypt he learnt of a water clock and later introduced the invention to the Greeks and Greece itself. Leaving the Egyptian shores, he sailed back to Europe and to Italy. While in Italy he studied the work of the great mathematician Pythagoras from his disciples and eventually realized the huge importance mathematics would have in the world. Through talking and discovering more about the work of Pythagoras Plato formed his idea "that the reality which scientific thought is seeking must be expressible in mathematical terms, mathematics being the most precise and definite kind of thinking of which we are capable. The significance of this idea for the development of science from the first beginnings to the present day has been immense." (G C Field, The philosophy of Plato (Oxford, 1956))

He found that in Italy and Sicily he was disgusted by the sensuality of life there, and the people’s pursuit of physical enjoyment and sexual pleasures, and he had fled back to Athens within a year.

According to Seneca Plato died on the same day he was born aged 81, but there are a variety of accounts that give a different age. There is one story, based on a mutilated manuscript, that suggests Plato was lying in bed whilst a young Thracian girl played the lute to him.

Plato’s Dialogues are dedicated to Socrates, making him the chief speaker, and are imaginary conversations on philosophy. In these conversations he puts forward his own ideas by taking up Socrates’ examples and tries to find the answers to questions like “What is justice?”, “What is beauty?”, “What is goodness?”.  The most important work was The Republic.

He wrote 27 dialogues and a few epistles, or letters, all of which were part of his teaching to his students, Aristotle being one of them, although most of his teaching was oratory. Plato founded the academy on the outskirts of Athens and his contributions to the theories of education were highlighted by the way he ran and taught within the academy and what an educated person should learn. His curriculum was logic, and legal philosophy including rhetoric. Although Plato had met Pythagoras, he made no mathematical discoveries himself, but had a strong belief that mathematics provides the finest training for the mind and was exceptionally important in the development of the subject. Over the door of the academy was inscribed: “Let no one unversed in geometry enter here.” The academy went on for more than 800 years, until its closure by Justinian.

Plato is also referred to as the founder of Western Political Philosophy. He believed in the Theory of Forms which stated that ideas were more timeless and absolute than the physical world. The legacy of Plato would eventually be established throughout the known world through Aristotle as tutor to Alexander the Great.

Books in our collection

The Oceana of James Harrington, esq : and his other works: with an account of his life prefix'd / by John Toland. To which is added, Plato redivivus; or, A dialogue concerning government

Every Friday our Special Collections' librarian Anne-Marie will be introducing you to each of the writers featured in the Octagon in this blog series.