Have you ever ventured into the Octagon, which used to be the Queen Mary library, for meetings or lectures and has your eye started wandering around the room? In doing so your gaze may have rested on the gold plated names etched in the base of the dome. These are the names of eight Greek and Roman philosophers and poets that lived in the ancient world, whose works are still read today. This week the focus is on Euripides. A series by Special Collections Information Assistant Anne Marie McHarg. 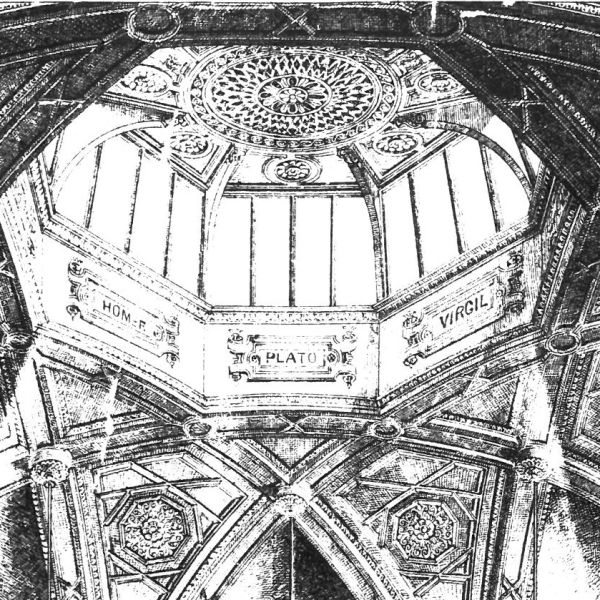 Euripides is one of the three major Athenian playwriters of tragedy in Ancient Greece. The role of the tragic writer was to write about the characters and happenings that were already well known in stories or legends and reuse them.

Euripides, despite taking these well-known stories, several of which had been used by other playwrights, made his plays seem new and different. Instead of showing the heroes as superhuman, or larger than life, he made them with the weaknesses and feelings that human beings have. This made the audience sympathize very much with the characters on the stage. His plays were written with great poetic beauty. He wrote many plays but only 18 have survived.

He is said to have been born on the Island of Salamis, and died at the court of Archelaus, King of Macedonia. His father was Mnesarchus who was a retailer who lived in a small village near Athens. His mother was called Cleito. An oracle had informed his father that Euripides was fated to “win crowns of victory” but Mnesarchus misinterpreted this, thinking that his son would excel in athletics whereas it was the stage that would beckon. As a child he served as a torch bearer and dancer at the rites of Apollo Zosterius. Euripides was educated in the fine arts which included studying painting and philosophy under the great philosophers of the day: Prodicus of Ceos and Anaxagoras.

In his youth Euripides also performed as an actor but unfortunately his voice was not strong enough to carry to the back of an outdoor arena that seated 1400 people. Therefore, he turned to the role of playwright. In Ancient Greece this also entailed being the producer and director of the play.

He had two disastrous marriages. Both his wives were unfaithful and he became a recluse.

As an old man, according to a story, he lived in a cave with two openings and a beautiful sea view, and their people would see him “all day long, thinking to himself and writing, for he simply despised anything that was not great and high.”

It is said that Euripides died in Macedonia after being attacked by the Molossian hounds of King Archelaus and that his cenotaph near Piraeus was struck by lightning - supposedly signs of his unique powers. This maybe left open to interpretation - later scholars think that his death may have been due to the harsh Macedonian winter.

Euripides wrote many plays that are attributed to his name. Here are just a few:

Medea: written in 431 BC, an account of Jason of the Golden Fleece fame and his marriage to Medea.

Andromache: written in 425 BCE, a story that takes place after the Trojan war about Andromache, a slave, and her battles with Hermione, the wife of her master.

The Trojan Women: written in 415 BCE, with Hecabe the Queen of Troy being the principal character amid the misery of the Trojan war.

Books in our collection

The Hecuba of Euripides : From the Text and with a translation of the Notes, Preface, and Supplement of Porson ; Critical and Explanatory Remarks, Original and Selected ; Illustrations of Idioms from Matthlae, Dawes, Viger, Hermann, etc. : A Synopsis of Metrical Systems / Examination Questions, and Copious Indexes by the Rev. J.R. Major

Plays by Thomas Middleton including translations of Euripides into English

The final installment of this series on the Octagon's writers by Special Collections' librarian Anne-Marie Mcharg.