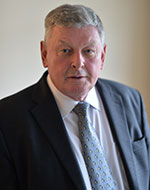 Dr Robin Callender Smith is Honorary Professor of Media Law at the Centre for Commercial Law Studies (CCLS). He is a four-time graduate from Queen Mary University of London, a barrister and a Fellow of the Chartered Institute of Arbitrators.

He is a specialist Technology, Media and Telecommunications (TMT) and regulatory arbitrator, mediator and adjudicator through ARBITA as well as a CEDR-qualified Mediator. He is an Adjudicator on the Panel appointed by the Society of Computers and the Law. Since 2013 he has been the Independent Adjudicator appointed by the Qatar Financial Centre Regulatory Authority (QFCRA) to determine issues within the authority’s Customer Dispute Resolution Scheme (CDRS) in respect of complaints made by customers and QFCRA-authorised firms.

He completed his LLB at Queen Mary in 1973 and was taught commercial law by the founder of CCLS, Sir Roy Goode QC. He completed his LLM in Computer and Communications Law with Distinction at CCLS in 2010 and his PhD – on celebrity privacy, the media and the law - in November 2014. His textbook Celebrity and Royal Privacy, the Media and the Law is published by Sweet and Maxwell. His fourth Queen Mary qualification came in 2020 when he completed his Postgraduate Diploma in International Commercial Arbitration.

He is an editor of Sweet & Maxwell’s Encyclopaedia of Data Protection and Privacy and is also co-editing the second edition of OUP's Media Law and Practice. A data privacy and media law barrister, he has advised national newspapers on pre-publication issues of libel, contempt, misuse of private information, copyright, breach of confidence and misuse of private information for over 40 years.

He was a Chair of the Code Adjudication Panel of the Phone-paid Services Authority (PSA), the premium rate telephone service Regulator recognised by Ofcom, and a Chair of Metropolitan Police Disciplinary Tribunals appointed by the Mayor of London’s Office for Policing and Crime (MOPAC). He was also a member of the energy Regulator Ofgem’s independent Enforcement Decision Panel (EDP), a Lay Member of the Executive Board of the Chartered Insurance Institute (CII) and a member of the CII’s Professional Standards Committee.

From 2012 – 2014 he was a Deputy Chair of the Regulatory Decisions Committee (RDC) of the Financial Conduct Authority (FCA) - formerly the Financial Services Authority (FSA) - dealing with high-profile and complex issues of market abuse, professional fitness to practice and corporate governance across the financial services sector including LIBOR and EURIBOR cases. He joined the FCA’s RDC in 2005.

He was an elected member from 2004 - 2007 of the Bar Council, a Vice Chairman of the Disability Committee and member of the Law Reform Committee (having led on the Mental Health Act 2007 and the Courts, Tribunals and Enforcement Act 2007). He was also an elected Member of Gray’s Inn Barristers’ Committee from 2004 – 2007. He is a Vice President of the London’s biggest youth charity London Youth having been a Trustee from 2006 – 2012.

He is a Council of Europe (CoE) expert on Data Protection and Open Justice Issues. He led an expert delegation of practitioner colleagues from the Czech Republic, Estonia, Italy and Moldova in preparing and presenting a CoE report to the Supreme Court of Kazakhstan in January 2016 on Open Justice, data protection and judicial transparency issues in civil and criminal justice decision-making.

He worked as a journalist for the Eastern Daily Press and Eastern Evening News in East Anglia for four years from 1966 – 70 before his undergraduate studies at Queen Mary.

Work in progress or projects/conferences and conference papers