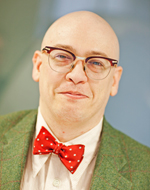 In 1999, Gavin Sutter moved to London to take up a twelve-month research assistant's post with the Centre For Commercial Law Studies at Queen Mary. Over two decades later, he is still at CCLS, now as a Senior Lecturer in Media Law. He is responsible for establishing the field of Media Law at CCLS, having introduced a media law module on the LLM with twelve students in 2004, and now teaching eight media-related modules across three different LLM programmes (London, Paris and Online) and the London LLB. In his spare time he also teaches legal basics and cybersecurity law to Chinese computer engineering undergraduates on the joint QMUL/BUPT degree programme in Beijing, established in 2004 as the first joint degree programme between a UK and a Chinese University.

Gavin read law at the Queen's University of Belfast, graduating with an LLB Hons (2:1) in 1997, and an LLM in Computers and Law, with Distinction (the first to be awarded on that programme, then in its ninth year), in 1998.

Gavin is Programme Lead for CCLS’s contribution to the JP.

Gavin is the convenor and teaching lead on the following modules on the London LLM programme:

He is also co-convenor and co-teaching lead on:

He is convenor and teaching lead on the following modules on the Technology, Media & Telecommunications Online programmes:

He is convenor and teaching lead on the following modules on the Paris-based LLM in Technology, Media & Telecoms:

Gavin has published widely on various aspects of media law, and his scholarly interests have a particular focus on the regulation of a wide variety of media content, from defamation and privacy through obscene pornography, to the law regulating the reporting of proceedings before the court system. His current writing is focused on the forthcoming Second Edition of “Media Law and Regulation” (Callendar Smith, Goldberg & Sutter, OUP), as well as a developmental project on “privacy by design” as enshrined in the GDPR, in a social media context. He also continues to contribute to the ongoing consultative process surrounding the Scottish Defamation Bill.

He is the Academic member for QMUL’s ELSA group’s work on the ongoing International Research Group on Internet Censorship.

Gavin is presently co-supervising several PhD candidates, covering such diverse fields as copyright in digital music, data protection in FinTech, intellectual property ownership and fan-created content, and Human Rights in the context of video games. He is available for supervision of new candidates in the field of media law.

He has been a member of the executive of BILETA (British and Irish Law, Education and Technology Association) since 2002, acting as its Vice Chair 2011-2013, and Chair 2013-2015. He is also a member of the Society of Legal Scholars, and Convenor of the SLS Media & Communications section 2018-2020. In his spare time, he is the founder director of the CCLS Technology, Media & Telecommunications law Institute.

Since 2006,  Gavin has been involved in the undergraduate joint programme between Queen Mary and Beijing University of Post and Telecommunications (BUPT). The programme is led by the School of Electronic Engineering and Computer Science and we contribute to the BSc in eCommerce Engineering with Law. Gavin is the programme director for CCLS.

He was also involed in teaching on courses for the summer programmes of US universities, specifically the University of Pacific McGeorge School of Law (2007-8) and the Southwestern Law School in California (2009-2011).

Gavin has spoken at a wide range of national and international academic events throughout his career, in locations as diverse as Berlin, Majorca, Brussels, Tigur Muis (Romania), Copenhagen, Amsterdam, Beijing, Boston, Washington DC, Zagreb, Edinburgh, Glasgow and Belfast. He has addressed senior judiciary from Thailand's IP courts, as well as members of the Sri Lankan Attorney General's office.  In 2018 he appeared before the Justice Committee of the Scottish Parliament as an expert witness on defamation reform; a second such appearance is pending.