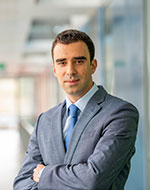 Dr Filip Saranovic is a Senior Lecturer in Shipping Law at the Centre for Commercial Law Studies, Queen Mary University of London. He is the Deputy Director of International focusing on global engagement and international partnerships. Filip is the module convenor for four maritime law modules on the LLM programme in International Shipping Law. He recently completed writing a book entitled Freezing Injunctions in Private International Law (to be published by Cambridge University Press). The book is based on his doctoral thesis completed at the University of Cambridge. Part of the research was conducted in the United States where he was a Visiting Researcher at Harvard Law School. Filip is an Ordinary Member of the European Association of Private International Law and has presented his research at numerous conferences both in the UK and abroad. He was a judicial marshal in London’s High Court, shadowing the work of Mrs Justice Gloster when she was the judge in charge of the Commercial Court. Prior to joining Queen Mary, Filip was a member of the Institute of Maritime Law at the University of Southampton where he was the Academic Lead for Executive Training. Filip’s work on injunctions has drawn the attention of the Bureau of Investigative Journalism who interviewed him in relation to their recent articles on high-value cross-border litigation in London.

Filip’s research interests are primarily in the fields of maritime law (dry and wet shipping), private international law, and commercial litigation. He is currently writing a paper on the role of ‘subjects’ in charterparty negotiations in the light of the Commercial Court’s decision in The Leonidas [2020] EWHC1986 (Comm). Filip completed his doctoral thesis on the private international law aspects of freezing injunctions at the University of Cambridge and was supervised by Professor Pippa Rogerson. During his doctoral research Filip was also a Visiting Researcher at Harvard Law School focusing on the theoretical foundations of jurisdiction and asset preservation relief including pre-judgment attachment and preliminary injunctions. Filip is interested in comparative research on civil procedure in commercial and maritime cases in the Middle East including Saudi Arabia and the United Arab Emirates.