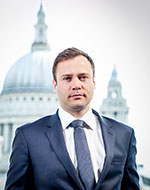 Dr Remy Gerbay is a Lecturer in International Arbitration at the Centre for Commercial Law Studies, Queen Mary University of London. He is also co-director of the distance learning LLM, PGDip and Certificate in international dispute resolution.

Alongside his academic post at Queen Mary, Remy is also Partner at US law firm Hughes Hubbard & Reed LLP, where he represents parties in international arbitrations and related litigation. Remy is admitted to practice as an Attorney (New York & District of Columbia) and as a Solicitor (England and Wales). Remy frequently sits as arbitrator, having been appointed in over 20 arbitrations under the rules of the ICC, LCIA, Swiss Chambers, DIAC and KIAC (as co-arbitrator, emergency arbitrator, sole arbitrator and Chairperson).

Remy holds a PhD in international arbitration law from Queen Mary, an LLM from Georgetown Law (Fulbright Scholar; Dean’s Honors List), a Master's Degree from the Graduate Institute (University of Geneva), and a French law degree from the University of Lyon (High Honours).

Since 2017 Remy has been identified as a “Future Leader” of arbitration by Who’s Who Legal. He was also recommended by Legal 500 in the US and UK for international arbitration.