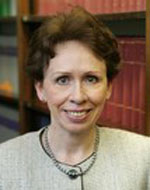 Dr Evans is Reader in International Trade and Intellectual Property Law at the Centre for Commercial Law Studies, Queen Mary, University of London and Visiting Professor University of Washington School of Law (2008). She has previously held academic positions in Australia and the United States. In the summer of 2006, she was a faculty member at the Duke-Geneva Institute in Transnational Law (2006) where she is taught International Intellectual Property Law. In March 2008 Dr Evans was nominated by Queen Mary students for the 2008 Drapers’ Awards for Excellence in Teaching. In addition, she is engaged in consultancy and capacity building work, most recently as a member of United Nations Economic commission for Europe (UNECE) Team of Specialists on Intellectual Property.

Her major research interest concerns the impact of economic globalisation on the law of International trade and intellectual property. Her most recent include "The Protection of Geographical Indications after Doha: Quo Vadis?"  Journal of International Economic Law, (2006) "Substantive Trademark Law Harmonization by Means of the WTO Appellate Body and the European Court of Justice: The Case of Trade Name Protection", Journal of World Trade, (2007) and; "Strategic Patent Licensing for Public Research Organizations: Deploying Restriction and Reservation Clauses to Promote Medical R&D in Developing Countries", American Journal of Law & Medicine (2008).

Further publications are listed and selected articles available for download at: http://gaileevans.com/publications.html