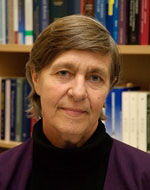 Janet Dine is Professor of International Economic Development Law at Queen Mary University of London and was Director of the Centre for Commercial Law Studies from 2005-2008.

Professor Janet Dine qualified as a barrister in 1973 and practiced at the English Bar dealing with criminal and commercial cases. In 1978 she became a lecturer at King's College London until she became a Reader at the University of Essex in 1992.

From 1992-2001 she was appointed by the UK Treasury as a Commissioner for Friendly Societies.

In 1991 Janet Dine introduced a new Section for the Gore Browne Company Law Publications focused exclusively on the EU Company Law. She published the first edition in 1991; the series in question continues to run very successfully up to now.

As Reader at the University of Essex in 1992 she worked with the Head of the Law Department to promote teaching excellence when the Higher Education Funding Council for England (HEFCE) awarded an ‘excellent’ grade for the department’s teaching.

She was promoted to a Chair at Essex and was Head of the Law School from 1994 until 1997. She promoted real scholarship in the department and significantly enhanced its research culture and output. The School advanced from an REF grade of 3 to 5.

Her research at that point focused on the operation of transnational corporations and Groups of Companies and she published the monograph: The Governance of Corporate Groups, Cambridge University Press 2000.

In 2002 Janet took an MA in Theology and Society at the University of Essex further broadening her scholarship and became fascinated with the imbalance between individuals, states and powerful companies.

Janet was awarded a British Academy Grant to visit Barbados and Mauritius to research the sugar industry from the time of slavery to the time of the WTO agreements (1995) and the The European Partnership Agreements (EPAs).

Human Rights and international trade law were the focus of her edited book Human Rights and Capitalism, Edward Elgar 2006 with Andrew Fagan. She details the lack of accountability for Human Rights violations by MNEs and analyses the tensions between property rights and Human Rights.

Poverty, international trade and power issues run through her work so she submitted a proposal to AHRC with Professor Granville in the same area which received a funding of £300,000; the projects was on ‘The Fairtrade  Movement: legal support and social implications’. One outcome of the AHRC project was publishing a book entitled: The Processes practices of Fairtrade: Thrust, Ethics and Governance (edited) with Brigitte Glanville.

In 2005 she was appointed as the Director of the Centre of Commercial Law Studies at Queen Mary University of London. During her term she planned the new Queen Mary LLM programme, found the Lincoln’s Inn Fields location for the CCLS and improved the staff gender balance and diversity.

In 2003 she was appointed as a commercial law expert in a project funded by the World Bank, the EU and the Deutsche Gesellschaft fuer Internationale Zusammenarbeit (GIZ) GmbH which was aiming at assisting the Balkan states to join the EU. She drafted laws and advised governments in Kosovo, Serbia, Montenegro and Albania to align their law with the EU acquis communautaire.

With Michael Blecher she drafted “Albanian Law 9901 on Entrepreneurs and Companies” of 14 April 2008.

The drafting process was complex because many Albanian business men, lawyers, government officials and Union representatives were not well versed in commercial law and the language barriers were great. The Albanian project is ongoing involving amendments of the Law because of new EU Directives and a new edition of the Commentary on the Law. She also trained the Albanian Judges about the company Law.

The Work on the Balkans led to her co-authored book Company Law in the New Europe: The EU Acquis, Corporate Methodology and Model Law, Edward Elgar, 2007 with Michael Blecher and Marios Koutsias.

She published another monograph in 2013, The Nature of Corporate Governance: the Significance of National Cultural Identity, Edward Elgar, on comparative corporate governance; the latter argued that the neo-liberal economic model of corporate governance is dangerous leading to selfishness, human rights violations, huge inequality and a environmental catastrophe for the planet.

This theme will be further explored in her forthcoming book Interrogating Growth: The Inefficiency Principle, Edward Elgar, 2016. In this book she will argue that rationality is not the complete answer to a just society metaphysical philosophy has a particular resonance.

She is an active member of a number of networks including one on the UN effect of foreign debt and other related international financial obligations and human rights. She is a member of a European funded project on close companies  (‘Work Close Corporation in Europe’ funded by ‘ El Tratamiento de las sociadades decapital cerradas en la evolucion legislative de la Union Europea y de las legislaciones nacionales de los Estados miembros - Ref DER2010-21436); International Corporate Governance & Law and  Global network for the Study of Human Rights and the Environment. With this network Edward Elgar publishes the journal of Human Rights and the Environment which she contributes to; and published “Jurisdictional Arbitrage by Multinational companies”, Journal of Human Rights and the Environment, Vol 3 No March 2012.

She is a member of the Food System Academy, sponsored by the Rowntree Foundation and recently a recorded a talk about MNEs and the impact in the food chain.

In 2015, Janet is applying to research Community Interest Companies, similar entities in the EU and comparing then with Benefit Corporations in the USA. She will submit the proposal to the ESRC and the ERC.

Books/Monographs (as author and co-authored)