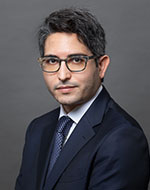 He is a pioneer of Special Purpose Acquisition Company (SPAC) studies in law, award-winner of the Colin B. Picker Prize (2017) by the American Society of Comparative Law, and author of the first book on SPACs ever in comparative law by Routledge (2021). His articles on SPACs have been featured on Fortune, Bloomberg Law, Oxford Business Law Blog, SOLE 24 ORE, Milano Finanza, Financial Mirror, Journal of Banking Regulation, Fordham Journal of Corporate and Financial Law, etc.

He is regularly invited to speak at international conferences, and he is frequently mentioned on newspapers or interviewed on matters related to financial regulation, private equity and SPACs.

Formerly, he held the position of module convener in International Finance and Company Law at the University of Hertfordshire. From 2010 he worked at international law firms such as Bonelli Erede Pappalardo, Dewey&LeBoeuf LLP and Deloitte LLP where he assisted clients in relation to M&As transactions, bond issuance and IPOs. He has also worked for the Financial Conduct Authority in London in the Criminal Investigation Unit – Enforcement and Market Oversight Division (EMO) dealing with high-profile white-collar crimes cases, and he has acted between 2020 and 2021 as an external consultant advising the European Bank for Reconstruction and Development on policy responses to Covid-19 and insolvency law regimes in over 38 countries of operation.

I have been appointed as a Mentor and Supervisor in order to coordinate a research project on Covid-19 convened by the International University College of Turin, the Institute for New Economic Thinking (INET), the Young Scholar Initiative (YSI) and the Association for Promotion of Political Economy and Law. The project is about comparing the legal-economic responses to Covid-19 across over 70 jurisdictions around the World. Mentors and Supervisors include important professors such as Professor David Kennedy (Harvard School of Law), Prof. Oreste Pollicino (Bocconi School of Law), Prof. Ermal Frasheri (Harvard Kennedy School), Prof. Jedidiah Kroncke (HKU School of Law), etc..

The Future of the Commercial Contract in Scholarship and Law Reform, October 2016 – September 2019

I have been part of this ambitious research project convened by Dr Maren Heidemann, Catherine Pedamon, and Dr Joseph Lee. The project is organised by IALS Centre for Corporate and Commercial Law, University of Westminster and University of Essex and it is focused on private as well as public international law.

I have been part of a study group of experts on monetary law at Harvard School of Law (Institute for Global Law and Policy). The research project has been convened by Prof. Christine Desan. The research is focused on the meaning of ‘money’ from a constitutional as well as economic point of view.

Building up a Single Payment System for the European Union, October 2015 – September 2016

I have been part of the Jean Monnet Teaching Module on the “Europeanisation of the Payment System” that was held in Siena in the second edition of Autumn School at the University of Siena. The research project is convened by Dr Gabriella Gimigliano and sponsored by European Commission.

Other Publications on Financial Newspapers and Media Outputs