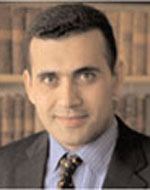 Eyad Maher Dabbah holds the Chair in Competition Law and Policy. He joined Queen Mary University of London in October 2001. Prior to that he was a lecturer in law at King's College, University of London where he taught EU competition law on the LLM programme and EU law, property law, trusts law and business tenancies on the LLB programme. Eyad specialises in the field of antitrust and competition. He has published widely in this field and is the author of several books dealing with national, regional and global competition law and policy. He is also the editor of two major works in the field: Merger Control Worldwide (with Paul Lasok QC) and Anti-cartel Enforcement Worldwide (with Professor Barry Hawk). Eyad is a frequent speaker and chairman at competition law conferences and events, and has taught competition law in many places around the world. He acts as special counsel and consultant to several governments, international organisations and business firms. Eyad has handled a number of high-profile competition law matters before competition authorities around the world as well as in arbitration proceedings. Some of the cases handled by Eyad have been the first of their kind in some jurisdictions.

Between 2006 and 2018, Eyad served as the General Editor (with Barry Hawk) for the Antitrust and Competition Series at Cambridge University Press. Eyad was called to the Bar in England and Wales. He is the recipient of a Harmsworth Major Scholarship.

Beyond competition law, Eyad has strong expertise in trade disputes and anti-dumping. During the past decade, Eyad handled a number of high-profile anti-dumping cases. He served as the chairman of the anti-dumping tribunal of the Government of Israel between 2012 – 2017.

Outside law, Eyad takes particular interest in the Middle East, especially Middle Eastern politics and the Israeli-Palestinian conflict. He has had various involvements on these fronts over the years and used to be active in the Middle-East peace process many years ago, especially when he served as head of the Union of Israeli Students in the United Kingdom, an organisation of which he was the first and only Arab to be voted and appointed Chairman. He is the author of the book, A Promising Middle East (2014) which deals with issues of major importance for the Middle East region - notably, education, ideology, political leadership, race and religion, culture, democracy and peace.

Eyad has particular expertise in the following areas of competition law:

Eyad is widely regarded as a leading expert and scholar in the area of international and comparative competition law. He has published extremely extensively in this area and is the author of one of the leading sources, International and Comparative Competition Law (Cambridge, 2010). He is also the author of The Internationalisation of Antitrust Policy (Cambridge, 2003) which is the first competition law book to be translated into Chinese worldwide. Eyad has been a strong advocate of building international strategies in the field of competition law. He has also written and advised on almost all competition law regimes around the world, making him, thus, a prominent figure when comparing between competition laws of different jurisdictions. His advice is often sought by businesses and governments on cross-border competition issues where a comparative perspective is highly valued by these entities for the purposes of solving complex issues.

Eyad has handled a number of high-profile matters dealing with competition law in different Middle Eastern jurisdictions. This includes acting as special counsel in major cases as well as advising governments in the region.

In 2009, Eyad launched the ICC Middle East Initiative which aimed at promoting competition law and policy within the Middle East. Eyad’s work has led to a number of concrete results including the establishment of academic research centres in Turkey (Bilgi University competition law research centre - Rekabet Hukuku ve Politikası Uygulama ve Araştırma Merkezi (“RHM”)) and in Israel (The Centre for Competition Law which later became The Heth Academic Centre for Research of Competition and Regulation).

Eyad has written a number of key texts dealing with developing and emerging economies.

Eyad’s work in relation to emerging economies covers procedural and enforcement matters as well as substantive law, notably abuse of dominance and monopolies, mergers and cartels.

Eyad has been very active in the area of merger control, both as an author and consultant. He has particular interest in cross-border elements of merger issues at both policy and practical levels. In 2011, he acted as a consultant to the OECD on a project dealing with cross-border merger control in emerging economies. In recent years, he has handled highly delicate merger matters involving the US and the EU. Often, Eyad answers  complex merger control questions notably with regard to: how should conglomerate mergers be appraised; bilateral cooperation between competition authorities (especially in terms of exchange of business confidential information); government involvement and national champions; and building business strategies on the issue of ‘remedies’ in merger cases requiring multiple filings around the world.

Other than being a co-editor of Anti-Cartel Enforcement Worldwide, Eyad has advised on anti-cartel measures in different jurisdictions around the world. One of the areas on which he has focused in his work is leniency programmes, in terms of formulating and building new leniency programmes in emerging economies as well as revising existing leniency programmes in advance and young competition law regimes alike in order to render them more effective and more suitable to the relevant regime.

Articles and chapters in books

Eyad welcomes proposals for postgraduate supervision in all aspects of competition law and policy.

Candidates who have successfully completed their PhDs under Professor Eyad Maher Dabbah's supervision:

Eyad has conducted many PhD examinations both within and outside the UK including at all leading academic institutions in the field of competition law and policy. He has examined the following theses: