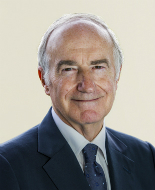 Professor of Financial Law and Ethics

Bill is also an Associate Member of leading barristers’ Chambers at 3 Verulam Buildings (3VB), London, in the International Advisory and Dispute Resolution Unit (IADRU) from which he is now sitting as an international arbitrator.

As a leading practitioner in the field of international banking and finance, he became a QC (Queen’s Counsel) in 1994 and was Chair of the Commercial Bar Association between 2003 and 2005.

Bill served as a High Court Judge in England and Wales for nearly ten years and was Judge in Charge of the London Commercial Court from 2016 helping to establish the specialist Financial List and the Standing International Forum of Commercial Courts. He has handed down many decisions in the field of arbitration and had overall responsibility for the arbitration cases as Judge in Charge. He continues to sit occasionally in the Court.

Bill sits as a Deputy Judge of the Court of First Instance of the High Court of Hong Kong SAR, China, and in 2018 sat as a Judge of the Qatar International Court. He currently sits as an international arbitrator in ICSID and LCIA cases, and he is in the Beijing International Arbitration Center’s Panel of Arbitrators.

In 2018, he was appointed a member of the International Commercial Expert Committee of the Supreme People’s Court of the People’s Republic of China, and he is Chair of the Enforcement Decision Making Committee of the Bank of England

At the European Union level, he is President of the Board of Appeal of the European Supervisory Authorities. He is a member of London’s Financial Markets Law Committee and chairs the Monetary Law Committee of the International Law Association. He is a member of the Expert Working Group on Commercial Dispute Resolution of the Chinese and UK judiciaries, and an expert adviser to the Oxford University OBOR Institute.