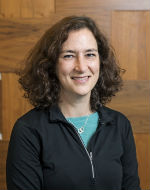 Lizzie Barmes joined the Department of Law in 2007. She previously taught at UCL and was a Government Lawyer in the Common Law Team of the Law Commission of England and Wales. Prior to that she practised as a solicitor, specializing in employment, equality and personal injury litigation.

Professor Barmes’ research interests are in the fields of equality and employment law. Her 2016 monograph, Bullying and Behavioural Conflict at Work: The Duality of Individual Rights, won the 2017 SLSA’s Hart Socio-Legal Book Prize. The book investigated the operation in practice of individual labour and equality rights at work, taking behavioural conflict as a case study, including about bullying. The methodology comprised analysis of relevant legal doctrine from 1995 to 2015, qualitative reading of judgments about this form of conflict from 1995-2010 and semi-structured interviews with senior managers and lawyers. Professor Barmes continues to work on the common law of the contract of employment and the contemporary evolution of labour law more generally.

Professor Barmes’ current research in the field of equality law concerns positive action, judicial diversity and the  use of confidentiality obligations/NDAs at work. Professor Barmes is working with Professor Malleson and colleagues from other universities and from legal practice on promoting diversity in the judiciary, in particular through the Judicial Diversity Initiative. Professors Barmes and Malleson are Co-Directors of QMUL's Centre for Law, Equality and Diversity (LEAD).

Professor Barmes has a long-standing interest in inter-disciplinarity and empirical research. She has drawn on the work of organisational psychologists to inform analysis of the law on workplace bullying, highlighted convergences and divergences between management thought on diversity and developments in equality law and is now exploring qualitative means of analysing ‘populations’ of judgments and undertaking empirical sociological enquiry into the impact of law within workplaces. Professor Barmes’ current work builds on her experience at the Law Commission, where she worked on many of the papers in the series on Damages for Personal Injury and, in particular, Damages for Personal Injury: Collateral Benefits (1997) Law Commission Consultation Paper 147, & the eventual Report, Law Com 262 and Damages for Personal Injury: Non-Pecuniary Loss (1999) Law Com No 257. The latter was innovative in its use of empirical evidence and resulted in changes to the tariff of awards in Heil v Rankin[2001] QB 272.

Professor Barmes welcomes proposals for postgraduate research in any area of employment and equality law.