A report by Kelly Parkington on a talk by Professor John Chalcraft of London School of Economics and Political Science (LSE). 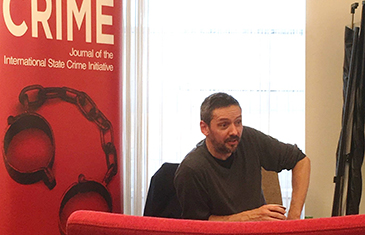 The International State Crime Initiative (ISCI) lecture is the first of its 2017-18 series, delivered by Professor John Chalcraft (LSE) and entitled ‘Transnational Activism and State Violence: Direct Action Dereliction and the Case of the Killings Aboard the Mavi Marmara’.

In this seminar, Professor Chalcraft explores the nexus between transnational civil society and state violence. Taking the Gaza Flotilla raid and the extra-judicial killings by the State of Israel of humanitarian activists aboard the Mavi Marmara as a case study, John presents an interesting case of ‘direct action transnationalism’ by a group of non-violent activists galvanized by the failure of existing forms of international and political civil society.

The talk covered the power of the transnational civil society, direct action, resistance and other types of novel interventions (non-governmental, rights-based activism etc.) that can be launched in a world of sovereign state relations and institutions.

Professor Chalcraft’s multidisciplinary research focuses on history and politics ‘from below’ in the modern Middle East and North Africa with a particular emphasis on questions of power, resistance, consent and hegemony. John’s current projects examine the relationship between transnational advocacy and activism with reference to Palestinian rights in Israel / Palestine, migrant labour rights in the GCC and civil and political rights in Bahrain, Egypt and Tunisia.

Further seminars in the International State Crime Series 2017-2018 will be announced here.

John Chalcraft graduated with a starred first in history (M.A. Hons) from Gonville and Caius College Cambridge in 1992. He then did post-graduate work at Harvard, Oxford and New York University, from where he received his doctorate with distinction in the modern history of Middle East in January 2001. He held a Research Fellowship and Caius College (1999-2000) and was a lecturer in Modern Middle Eastern History in the Department of Islamic and Middle Eastern Studies at Edinburgh University from 2000-2005. He is currently a Professor of Middle East History and Politics in the Department of Government at the LSE.