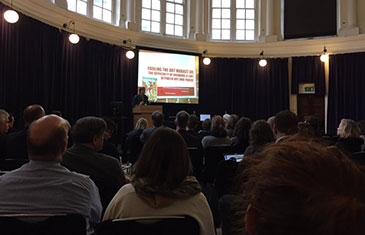 Following the success of the first workshop focusing on art theft and vandalism, the second AHRC Network workshop on Art, Crime and Criminals - Painting Fresh Pictures on Art Theft, Fraud and Plunder aimed specifically at discussions in the area of art fraud and forgeries. The event was organised by Professor Duncan Chappell, Dr Saskia Hufnagel and Ms Marissa Marjos and held in London, 16 January 2017.

Presentations included academic and practitioner perspectives in the field and a number of different jurisdictions around the world. North America and Canada were represented by the founder of ARCA, Noah Charney and Jean Dendy Centre de conservation du Québec, Ministère de la Culture et des Communications. The Criminal Investigation Office (State of Berlin) had sent Rene Allonge and Steven Weigel. Detective Chief Superintendent Allonge presented on his in depth experience in the area of art fraud and in particular on the investigation into the notorious German forger Wolfgang Beltracchi. D , Senior Lecturer in Criminal Law and Co-Director of the Criminal Justice Centre at Queen Mary University of London (QMUL), also presented on German forgery cases and the facilitation of the crime by developments in the art market since the 1970s and 80s.

A major highlight of the workshop was the presentation by and discussion with the former art forger John Myatt who presented his view on factors facilitating the crime of forgery and ways to prevent it.

Law enforcement was further represented by Toby Bull (Hong Kong Police), Vernon Rapley (former Metropolitan Police Department and current Head of Security, V&A Museum) and Michael Will (Europol). They presented experiences in the area of art fraud and problems in investigations as well as cooperation with other agencies in the field.

Professor Duncan Chappell presented the Australian situation as well as Professor Robyn Joyce Slogget focusing on revealing fraud and forgeries through scientific measures and the problems of expert witnesses in this area.

James Ratcliffe from the art loss register presented on a different type of fraud that can be committed through art to broaden the concept of fraud in the area of art crime.

Tim Maxwell from BoodleHatfield showed the civil law implications of the crime.