PhD students and early career researchers from across the world gathered at Queen Mary University of London (QMUL) on 3 June 2016 to share their research, present their ideas, engage with other researchers, and expand their understanding at the annual Queen Mary Postgraduate Legal Research Conference. 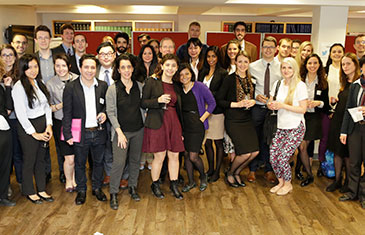 Now in its seventh year, the conference aims to foster a supportive network for legal researchers and is organised by a Conference Organising Committee of PhD students and LLM students from the School of Law at QMUL.

The conference was opened by Professor Spyros Maniatis, Director of the Centre for Commercial Law Studies at QMUL and Professor Malgosia Fitzmaurice, Director of Graduate Studies of the Department of Law, both of whom stressed the importance of the conference in facilitating the sharing of ideas by PhD students from across institutions, areas of law, approaches, and methodologies.

Comprising a keynote lecture, a soapbox session, a poster session with nine posters, and thirteen panels each with three to four presenters, this year’s conference was the largest to date with nearly 100 participants from institutions in Europe, Asia, Australia, and the United States. This year’s theme was ‘Embracing New Approaches’, which captured the diversity of research being conducted worldwide, ranging from intellectual property to human rights and from banking, finance and insurance law to legal education and profession. Panel sessions were chaired by academics from QMUL including Visiting Professor Brian Tamanaha of Washington University in St. Louis who moderated the Legal Theory and Legal History panel.

A keynote lecture was delivered for the first time at the Queen Mary Postgraduate Legal Research Conference. Professor Sir Roy Goode CBE QC FBA, Founder and first Director of the Centre for Commercial Law Studies at QMUL, Emeritus Professor of Law at the University of Oxford, and Emeritus Fellow of St John's College, Oxford, shared his insights on ‘How Academia Can Influence the Development of Law’.

Professor Anne Flanagan capped off the day by chairing the soapbox session during which four students pitched their controversial ideas to be challenged by the audience. QMUL PhD student Elif Mendos Kuşkonmaz spoke on ‘Reviewing the Compatibility of the EU-US Passenger Name Records Agreement with Respect to the European Right to Privacy and Data Protection’ and was declared the winner of the session by popular vote.

A selection of the papers presented at the conference and the winning poster – ‘Shared Responsibility in the Context of Extraterritorialised/Privatised Migration Controls’ by Ceren Toprakseven – will be published in a special issue of the Queen Mary Law Journal scheduled to be released in October of this year.