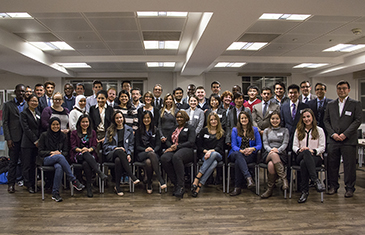 Recipients of the 2014 law scholarships were congratulated at a special reception held at the postgraduate law centre in Lincoln’s Inn Fields in November 2014.

The School of Law at Queen Mary offers significant funding for postgraduate study. Winners are chosen based on the combined recognition of academic merit, professional achievement and financial need. Queen Mary also has a long history of attracting Chevening, Commonwealth and Jean Monnet scholars as well as many government and industry-sponsored students.

Professor Spyros Maniatis, Director of the Centre for Commercial Law Studies (CCLS), said: “We are very proud that such outstanding students have chosen to come to Queen Mary, we hope that they will enrich the learning community and that in turn they will benefit from our academics, visiting academics and practitioners and the other students.”

“The scholarship winners represent an incredible diversity of nationalities and we hope that when they leave us they will become distinguished ambassadors for Queen Mary as they pursue legal careers across the world.”

In 2014 The School of Law offered offered more than £1million pounds of financial support for postgraduate law programmes.

LLM in Law and Economics Winners