PhD students and early career researchers from across Europe came to Queen Mary University of London on 4 June 2015 to share their research at the annual Postgraduate Legal Research Conference. 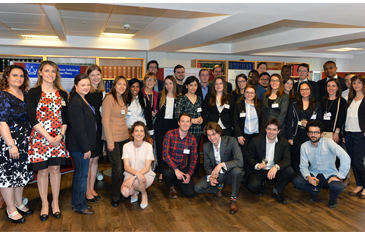 Now in its sixth year, the conference aims to foster a supportive network for legal researchers and is organised by PhD students from the School of Law at Queen Mary University of London.

This year’s conference was organised by QMUL PhD student representatives, Charlotte Rushworth and Sam Fowles. We asked Charlotte to tell us a bit more about the day.

What was the aim of this year’s theme?

Whilst the academic world is often considered as similar to a ‘big machine’, the focus and aim of this annual conference has always been to create a supportive and yet professional context for the ‘small cogs,’ or new researchers, to present their ideas, to engage with other researchers, and to expand their understanding on wider disciplines which may cut-across their own legal field. Participants came from across Europe, from Pisa, Paris and Poland, to share their PhD research in a bright and vibrant environment of fellow early researchers.

Which areas of law were covered?

In his opening speech, Professor Spyros Maniatis, Director of the Centre for Commercial Law Studies at QMUL, praised the broad range of subjects and academic rigour which is a common feature of these conferences.
True to his commendation, the programme for the day had a diversity of topics, from human rights to banking and finance and from legal theory to intellectual property, all under the overarching title for this year’s conference, ‘Commerce, the Law and Individual Freedom: Small Cog, Big Machine.’

How do QMUL legal academics contribute to the conference?

It was a full day, with over twelve different sessions. There were panel sessions across ten different subject-areas in legal study, which all had three students or more presenting papers to a small audience. These panels were chaired by our own leading legal academics, most of whom are specialists in their panel’s area.

Guest participants in the conference commented on how honoured they were to have the support and guidance of these Chairs when presenting their papers, and the academics themselves enjoyed being amongst fresh new ideas being brought to the debate. There was also a full poster exhibition which offered chance for students to engage and interact when discussing the visual presentations of fellow PhD students.

What is the Soapbox Session?

The soapbox session allows a selection of researchers to put forward a ‘soapbox pitch’ on a radical or different idea, but within a strict time limit of five minutes. One of the ideas this year was on the plausibility of assassination for crimes against humanity.

Professor Chris Reed chaired the session and brought an energetic and engaging finish to the whole day, and there was still time for delegates to speak with peers and have a last look at the posters during the evening reception.

How is the conference organised?

"We had some very good feedback, and that's thanks to everyone who helped organise this event!

“Thank you very much for organizing this amazing event! It is by far the best PhD Research Conference I have attended…” Radosveta Vassileva, Conference Participant, University College London