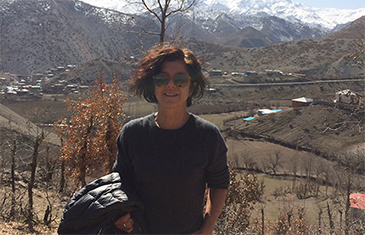 Professor Penny Green is director of the International State Crime Initiative (ISCI), which has been based at QMUL’s School of Law since 2014. Penny and her team of researchers have, in the last month, generated global coverage for their research on the humanitarian crisis facing the Rohingya Muslims in Burma.

You’re director of the International State Crime Initiative – tell us about its formation and the centre’s work.

I’d been researching state crimes in one way or the other for many years and felt we could have a far greater impact if we could consolidate the work of scholars around the world working on state violence and corruption. When my colleague Tony Ward and I were researching our book State Crime: Governments, Violence and Corruption we were struck by how few criminologists were researching in the field, but we found psychologists, geographers, historians, anthropologists, linguists, political scientists and international lawyers researching genocide, torture, state terror, forced evictions, war crimes and grand corruption. ISCI has provided an intellectual home for scholars working in the broad field of state crime.

It was a real labour of love – working with PhD students every weekend for a few months and a mammoth collective push to secure our first big Economic and Social Research Council (ESRC) grant.

ISCI has come a very long way in a very short time and we now research in Burma/Myanmar, Kurdistan, Turkey, Palestine, Tunisia, Kenya, Colombia, Palestine and Papua New Guinea. Our conceptual reliance on civil society (rather than law) to determine whether or not states are acting criminally means that a very significant part of work brings us into close contact with some of the bravest and most courageous activists in those countries who are challenging repression, state violence, land grabs, forced evictions and corruption.

We’ve also had tremendous support from our honorary fellows Noam Chomsky, Richard Falk and John Pilger who exemplify what it is to define, expose and challenge the worst forms of state criminality.

What sparked your interest and passion for researching crime by states and governments?

I’ve been a socialist all my adult life so exploring the way the world works from the perspective of those most vulnerable to state violence and corruption (but also most capable of bringing about major political and social transformations) is natural. I’ve also been interested in understanding the state in relation to capital – my PhD, for example, explored the policing of the 1984-85 miners’ strike. Traditional criminological notions of the state as protector make little sense for the millions around the world who experience states as perpetrators of the worst forms of human rights violations. Our work is not just focused on developing countries; a primary concern is to illuminate the role of western governments in sustaining criminal regimes and to investigate and expose the state crimes that they commit themselves – the invasion of Iraq in 2003 being one of the clearest examples.

You’ve described the crisis facing the Rohingya Muslims in Burma as genocide. What did you see during your field research there?

We understand genocide as a process which begins slowly with state processes of discrimination and stigmatisation. This creates fertile ground for targeted physical and psychological harassment and violence. What follows is the physical isolation of the target group, then its systematic weakening, the stage prior to mass annihilation. What we witnessed in Burma’s Rakhine state was simply horrifying – a whole people reduced to a state of existence which can only be described as ‘bare life’. The Rohingya are currently being systematically weakened through hunger, denial of all emergency healthcare and loss of livelihood. They have been denied citizenship, stigmatised, restricted to camps and isolated villages they are unable to leave, denigrated as illegal Bengali immigrants and the victims of mass violence; they languish in deplorable conditions in detention camps and Sittwe’s one ghetto. My team and I could not help but be struck by the parallels with 1930s Germany.

How do you protect your safety, and the safety of your team, in hostile and difficult environments?

My primary concern when we are in the field is the safety of our researchers, our fixers, translators and our interviewees. We ensure we have excellent intelligence on the regions in which we are working, try to stay under the radar, and ensure daily means of communication which are not reliant on efficient internet connections (WhatsApp is particularly valuable). Travelling by trishaw, tuk tuk and helmetless motor bike across deserted paddy fields is unavoidable but probably presents more immediate risks.

The contrasts between the UK and many of these environments must be quite stark. Is it difficult to ‘cool down’ from these experiences when you leave the field?

It can be – I suffered nightmares for two weeks following fieldwork in the desperately squalid Rohingya detention camps, and shared the grief of the Kurdish mountain community of Roboski following the murder of 34 of its children and young men by the Turkish state in 2011. I was also filled with an unremitting sense of injustice when I returned from my first trip to Palestine – the injustice of everyday humiliation, apartheid structures and violence that the Israeli state daily inflicts on Palestinians.

But that grief, sense of injustice and anguish is important – I sometimes worry about becoming inured to the brutality and criminality of states and the repression and misery inflicted because, of necessity, we must adopt a clinical approach to research methodology. The nightmares, sorrow and fury play an important role in forcing me to address challenging and methodologically difficult questions but it is crucially important not to let those emotions distort the research process.

And of course there is the flip side – working with communities resisting state crime brings me into contact with outstandingly brave and courageous communities and that experience is always uplifting and enriching.

You work in difficult, challenging settings – what sort of characteristics do you look for in your researchers and associates?

I am so fortunate in having the most incredibly talented team here: Tom MacManus, Alicia de la Cour Venning and Fatima Kanji. My colleagues at the Harvard Humanitarian Initiative, Tony Ward from Hull and Kristian Lasslett at Ulster are equally inspiring. They are all intellectually and actively intrepid in their commitment to challenging state criminality. They all share intellectual brilliance, integrity, compassion, courage, political acuity and an ability to instill trust in those who are most vulnerable to state violations.

How are you adjusting to life at QMUL?

Very happily! I love the proximity of the East End and the City and I’m increasingly appreciating the dynamic campus environment. I was originally attracted to QMUL by the exceptional quality of research in humanities and social sciences, the encouragement of inter-disciplinarity and by the collegiality of staff in the School of Law. I’ve since discovered the delights of Ariana’s across the park and that is a decided bonus.

What are your plans for the future development of the International State Crime Initiative?

We are moving in some very exciting new directions. Tom MacManus (our Leverhulme Fellow) will be developing research on the role of public relations corporations in state crime denial, while Kristian Lasslett will lead on corruption in Uzbekistan, and our Newton Fellow Mehmet Kurt and I will be working on Islamist movements and state violence in Turkey. We have a very strong internship programme and I’m keen to see us create new postdoctoral opportunities. We are also hosting the brilliant photographer Greg Constantine later this year and will work with him on a major Rohingya exhibition.

The recent tragedy of Burmese Rohingya asylum seekers stranded in the Andaman Sea presented us with an extraordinary opportunity to change the direction of the public debate. While the UN, media and governments around the world declared it a trafficking crime and a ‘humanitarian crisis’(thereby deflecting attention away from Myanmar), our research provided the systematic evidence to attribute blame where it lies – with the Myanmar government and its genocidal practices against this fleeing population.

It is rare in academic life to have the world’s media clamouring for interviews and we are just emerging from three weeks’ intensive exposure of our research. I think our work has now been quoted in over 150 media outlets and because we are the only academics, to our knowledge, who have systematically conducted fieldwork in Rakhine state we are in a position to make what we hope is an important contribution.

What do you enjoy outside of work and your research?

There’s not much time these days outside of work, especially as my research now involves so much travel, but I do love spending quiet time in Australia and in Turkey with family and friends. I love the sea and I find it especially important to reconnect with the uncomplicated life I find there.

Running is also an obsession and Regent’s Canal with its swans, geese and canal boats brings endless pleasure. Until a recent fall I loved climbing too. My daughter Grace is a champion climber and climbing with her is a real treat so I really must get back on the walls.