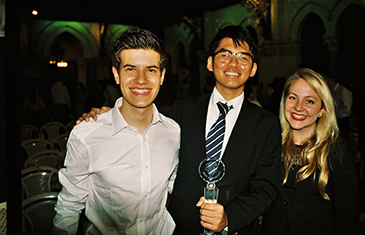 A team of law students from Queen Mary University of London competed against teams from around the world to reach the quarter finals of the DM Harish Moot Court Competition in India held on 12-15 February 2015.

Read Hannah Paige Fry’s account of her experience of the DMH Moot. 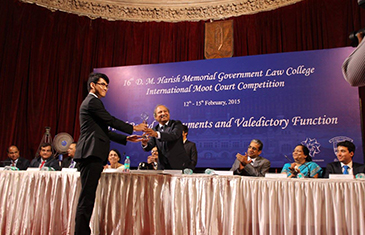 Theo Meddick-Dyson’s account of his experience of the DMH Moot:

The format of the competition was completely different to anything you would find in the UK; each team was comprised of two Speakers and a Researcher, and two months before the competition itself teams were required to submit two 40-page long Memorials (written arguments) in a specific format, to which they would be bound for the duration of the competition. These would be exchanged by teams prior to each round, following which the team would work furiously to find the weak points of their submissions in relation to the opponent's Memorial and find the best way to protect them whilst simultaneously attacking the opponents' weaknesses. 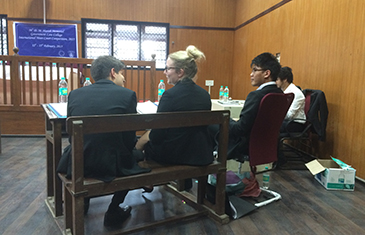 The courtroom experience itself was the biggest challenge for Western teams; presence of pigeons and crows in classrooms accompanied by the backdrop of car and motorcycle horns aside, it was very difficult to escape judicial bias especially in the earlier rounds and thus the competition is one in which the dreams of victory from a team used to Western mooting practices is a near-impossible one to attain.

Nevertheless Queen Mary's team did fantastically, progressing further than any other Western team (including NYU, Sussex, and a team of BPTC students from Northumbria) and finally going out in the Quarter-Finals to one of two Singaporean teams who were considered in the earlier rounds to be the strongest team in the competition. In addition to this Queen Mary's Researcher won the award for Best Researcher, having scored the highest in the Researcher's Test which was an hour long test on the moot problem and International Law in general given on the first day of the competition.

Of course the experience didn't end there. The teams who did not progress to the Semi-Finals were treated to a sightseeing tour of Mumbai in the morning before the Final round, during which everyone involved was able to experience some of the rich culture and history of Mumbai. Throughout the competition we were treated to a diverse range of Indian dishes, as well as French, Italian, American and other themed meals prepared in an Indian style, which made the trip all the more enjoyable. 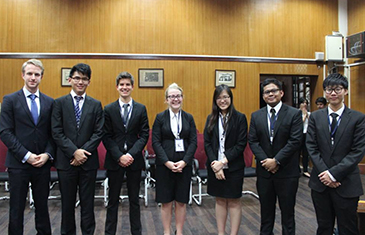 Overall the trip provided invaluable experience of mooting in one of the most far removed contexts than that we are used to and an insight into, and experience of, Indian culture which the team will never forget. During our time in Mumbai we met teams from 15 other Indian states, and learnt slivers about the huge cultural diversity evident within India itself. To any teams looking to compete in the future we would say don't go to win, but do go. The time we spent in Mumbai has touched our lives in ways which we had never imagined at the outset, and the competition has allowed us to develop both personally and as legal advocates.