The quality of contributions from finalists in the annual QMUL mooting competition was “nothing short of astonishing”, according to Sir Christopher (Lord Justice) Pitchford, who judged the final at Queen Mary University of London on 24 March. 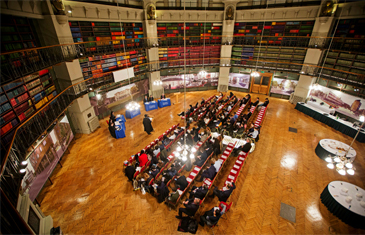 The ‘George Hinde Moot’ – organised by students and academics at QMUL’s School of Law – provides undergraduate students with ‘real-world experience’ as well as an invaluable insight into advocacy and the Bar. Participants are expected to present and defend legal arguments under court room conditions.

The winner of the 2015 competition, as adjudicated by Sir Christopher Pitchford, was Drushika Michael Amirthanayagam. Drushika was presented with the prestigious award in front of an audience of students, staff members and alumna. The Judge praised each of the finalists for their poise, command of the issues, and the preparation of their cases. The other finalists were Andrea Efthymiou, Amy Rumble, and Stella Tsantekidou.

The George Hinde Moot competition has been running for more than four decades, and represents an important milestone in the legal academic calendar at QMUL.  This year more than 180 law students took part in the six rounds of the competition, tackling moot problems in criminal law through to contract law; overseen by student moot masters, Gillian Hocking and Joseph Broadsmith.

Professor Valsamis Mitsilegas, Head of the Department of Law, opened the moot final and welcomed Sir Christopher Pitchford back to his alma mater (class of 1965). The competition formed part of the School’s 50th anniversary celebrations.

Students are supported by faculty, alumni and the moot masters throughout the competition. This year’s competition was organised by Mr Rupert Seal, Lecturer in Property Law, and Dr Daniela Nadj, Lecturer in Public Law.

According to Rupert Seal:

"QMUL's continued success in national and international moot competitions can be attributed to the valuable skills and confidence that students gain during the George Hinde Moot. This year, QMUL students have excelled in the Thomas A Finlay Moot in Dublin, DM Harish Memorial in Mumbai, and the ELSA EU Human Rights Moot in Strasbourg."