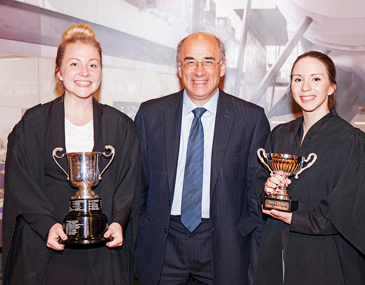 View more photos of the moot competition on Flickr. 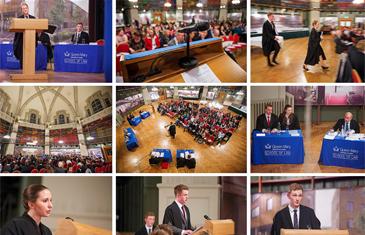 Students, faculty, alumna and guests attended the final, which was held in the Octagon at Queen Mary University of London. It was judged by Sir Brian Leveson, who led the Leveson Inquiry into the Culture, Practice and Ethics of the Press and whose work on the Rosemary West and Damilola Taylor cases have made him a household name.

Sir Brian Leveson congratulated all four finalists and he said they had "given carefully thought through arguments, were extremely articulate and took pride in their performance".

He encouraged students to rely less on written notes as it makes it harder to respond to interventions and return to your place. Instead he said that it's better to develop the submission in bullet points and pick up and develop arguments as needed.

In summing up he said that he "enjoyed the moot enormously " and that it 'makes a change for serious points of law to be deliberated in one hour and for me to deliver a judgement in 20 minutes!'.

The George Hinde Moot competition has been established for over 40 years. This year more than 140 law students took part in the six rounds of the competition, tackling moot problems in criminal law through to contract law and overseen by student Moot Masters, Anna Jones and Theo Meddick-Dyson.

David Ormerod, Law Commissioner and Professor of Criminal Justice at Queen Mary, opened the moot final and commended the moot masters for their work organising the previous rounds of the competition.

The quarter finals of the 2014 competition were judged by Rudi Fortson QC, Nigel Pascoe QC, Mark Whitehouse and Helen Trotter. The semi finals were held at Snaresbrook Crown Court.

Anna Jones, Moot Mistress, said "Mooting is a great opportunity for all students and some of my happiest times at university have been because of mooting."

Several students have secured work experience, mini-pupillages and crown court marshalling opportunities as a direct result of their exposure to QCs and barristers during the moot competition.

Students are supported by faculty, alumni and the moot masters throughout the competition. Dr Stephen Allen and Richard Saffrey-Mayger gave advice and judged in the early rounds. QM alumni Jonathan Crystal QC and Aaron Osborn gave a workshop and prepared questions for preliminary rounds.

Next year's competition will be overseen by Moot Masters Gillian Hocking and Joseph Broadsmith.