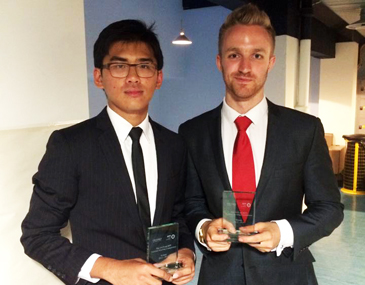 74 universities entered the OUP & BPP National Mooting Competition in October last year. Queen Mary progressed through the four rounds to win the final round ahead of LSE, Aston and Kaplan, on 10 July.

The Queen Mary team was Theodore Meddick-Dyson and Darren Low with Travis Robertson competing in the earlier rounds.

The final round moot problem 'In the Court of Appeal (Criminal Division): R v Merchant' was judged by His Honour Judge Gratwicke, the Honorary Recorder of Chelmsford.

External Moot Mistress, Tania Rahmany, supported the team and said: "I'm extremely proud of the team's success. I hope this will encourage students to take up external mooting next year (particularly as they have also each received a £750 cash prize!) and continue QMUL's excellent reputation in mooting."