The final of the Queen Mary Law Society negotiation competition took place on 17 March 2014 at Macfarlanes LLP in London. The competition, which aims to enhance negotiation skills, is run by the student law society and is open to Queen Mary University of London undergraduate students. 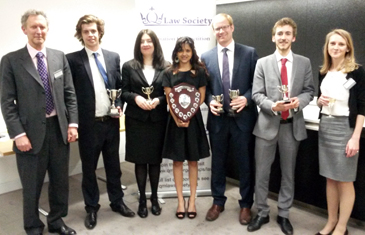 This year's finalists were Alasdair Copland, David Edwards, Axel-Charles Monin Nylund and Kim Varis. David Edwards won the negotiation competition while Kim Varis and Alasdair Copland were the winning team. The winner's prize is a guaranteed place at an assessment day for a vacation scheme with Macfarlanes LLP.

Two pairs of students take part in each hour-long negotiation session. Each pair represents a different client for a given scenario. The participants have 20 minutes to plan before they begin 30 minutes of negotiation, followed by 10 minutes of self analysis.

Negotiation skills are essential in both law and non-law careers. Many law firms use negotiation skills on assessment days and whilst the scenarios in the negotiation competition are written to include aspects of the law, earlier rounds incorporate realistic situations such as negotiating the terms of a football contract or a divorce settlement for a high-profile actor.

Candice Ramnanan, a final year law student, is this year's Executive of the Negotiation Competition Committee and Vice President of the QM Student Law Society. She was a finalist in the first year of the competition and a judge in the second year. Candice said she has 'thoroughly enjoyed all three roles in the competition; not only was it fun to participate but it provided a more simplistic method of gaining negotiation and other core skills.'

As Executive of the competition she has gained useful experience through diverse tasks such as preparing a revised judging standard, writing scenarios, contacting external judges and recruiting student judges.

Candice Ramnanan said "Although QMUL did not advance to the next round, we received invaluable feedback which we implemented in our internal competition and we've acquired a better idea of the structure of the external competition for future involvement."