A team of six LLM students representing Queen Mary University of London navigated their way to a place in the final four of the Price Media International Moot Court Competition held at the Faculty of Law at Oxford University. The competition was held from the 1-4 April and consisted of 35 teams from around the world.

Coached by distinguished Queen Mary alumnus, Robin Callendar Smith, the team fought their way to the semi-finals of the competition before being beaten by the eventual winners, the Jindal Law School of India. 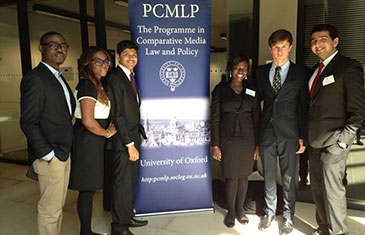 We asked the QMUL team to reflect on their experience:

The Monroe E. Price Media Law Moot Court competition was a challenging, intense, yet exhilarating experience. The QMUL/CCLS team was most unique, comprised of six members of varying nationality working in unison to produce winning oral arguments and outdoing the previous year’s performance by 16 places.

One of the best parts of the whole experience was the ample opportunity we had to engage one-on-one with many distinguished media law judges, practitioners, academics as well as fellow media law students from universities around the world. Thanks to our coach Robin Callendar Smith we were put through our final paces by Mr Justice Cranston in Court 18 at the Royal Court of Justice, a process that proved invaluable to our preparations. Sir Ross Cranston QC, a former Director of CCLS, has kindly agreed to give next year’s QM team the same opportunity before the 2014/2015 competition and we are sure that they will find it as rewarding as we did.

We were extremely impressed by the relevancy of issues captured by the Moot Court problem, the transparency of the entire competition as well as the fairness and knowledge displayed by the members of the Bench. We highly recommend the Price Media Law Moot Competition for any student media law enthusiast.

Here are some individual testimonies from the team and their coach: 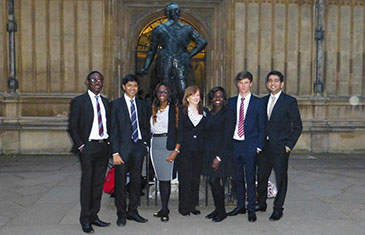 “As team captain I was challenged on all fronts, but as the saying goes without pressure a diamond remains a lump of coal!” – Fiona Forbes

“Being part of such a great team, learning from each other, networking with professionals from different jurisdictions, honing my advocacy skills, receiving encouraging commendations from Judges; my entire experience was rewarding.” –Omolola Agbaje-Williams

“I had many brilliant moments being a member of the QMUL team. The whole experience was exceptional and I would absolutely recommend the competition to anyone who enjoys this area of law.” – Alexander Willingham
“Six people, six points of view, four countries but one team.” – Rishabh Jogani

“The highlights of the competition for me were the diversity of participants and of our team, as well as the realization that most teams were regional/national champions; thus, having to brave the odds. Progressing to the final four was no mean feat.” – Olugbemi Oduntan

“Our team was most remarkable as we had six speakers who could comfortably make and of the arguments. Also, the competition provided a great platform for networking which resulted in securing me a short placement at The Guardian.” – Mahesh Chowdhary

“During the final practice in the High Court it was quite clear that all six of the team were so good that we should not limit ourselves to four oralists if we progressed beyond the first stage of the competition. That meant revising our entire strategy, taking the risk that someone would be disappointed if we failed to reach the final 16. I believe this spurred the team on to make it as far as the final four.” – Robin Callendar Smith