The House of Lords Justice, Institutions and Consumer Protection EU Sub-Committee launched its new inquiry into the role of the proposed new European Public Prosecutor's Office (EPPO) on Wednesday 26 March. 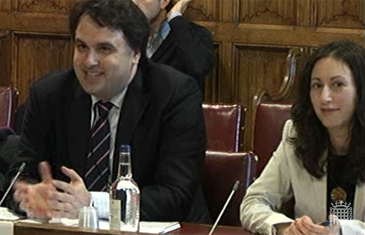 Two professors of criminal law responded to questions from the Committee on the role of the new EPPO and what it would mean for non-participating member states, such as the UK.

"The establishment of the European Public Prosecutor's Office poses significant constitutional challenges to the European Union and its Member States," said Professor Valsamis Mitsilegas, Head of the Department of Law and Professor of European Criminal Law at Queen Mary University of London.

Professor Valsamis Mitsilegas was questioned alongside Professor Dr Katalin Ligeti, Professor of European and International Criminal Law, Luxembourg University, on issues such as how the EPPO would work and what possible problems they foresee for non-participating Member States and resource implications for Europol, non-participating Member States and others.

The European Commission published its proposal to set up a European Public Prosecutor's Office (EPPO) in July 2013. The new EPPO would be a "body of the Union" with a separate legal personality and with a remit to investigate, prosecute and bring to justice both the perpetrators and accomplices involved in committing fraud against EU finances.

However, the Coalition Agreement, signed by the Government in 2010, indicated that the UK will not opt-in to the EPPO proposal and, under the European Union Act 2011, could not do so unless a referendum was held.

Professor Valsamis Mitsilegas added: "The work of the European Public Prosecutor will inevitably have an impact on the UK, notwithstanding the Government's current decision not to participate in its establishment. The Government's negative attitude towards European criminal law may result in significant negative effects with regard to the effectiveness of law enforcement and judicial cooperation between UK authorities and their European counterparts. The relationship between the European Public Prosecutors' Office and agencies such as Eurojust and OLAF needs to be considered carefully in this context."