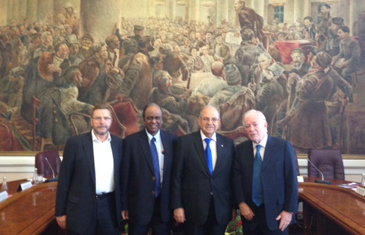 Seán McConville, Professor of Law and Public Policy at Queen Mary University of London, spoke on 'The Legalisation of Illegality: Acts of Indemnity and Amnesties'. His presentation drew on his EU funded work on the 'Peace Process: Layers of Meaning' project,  as well as his continuing research and writing on Irish political prisoners. The paper explored some of the issues of access to justice – civil and criminal - for victims and survivors, and discussed the balance between political and judicial imperatives and outcomes.

The International Association of Judicial Independence and World Peace was founded in 1982 and it is one of the most reputed international organizations, which unites practicing lawyers, competent experts in law and effective judges around the world. The work of the Association is focused on drafting international standards of judicial independence, supporting culture of peace in all states, promoting the ideals of peace, democracy, freedom and liberty by strengthening and maintaining of judicial independence.

View videos of the conference: www.ustream.tv/search?q=ADLbroadcast