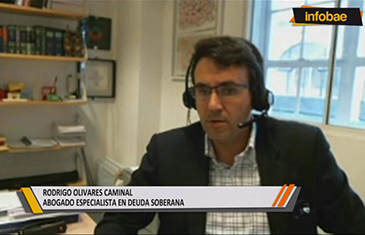 was cited by the leading Argentine newspaper La Nacion in relation to the recent decision by the US Supreme Court which forces Argentina to pay in full those bondholders that decided not to take part in the debt restructuring. He was consulted about the possibility of obtaining a stay while negotiations to find a solution continue.

Professor Olivares-Caminal was also quoted by Portuguese newspaper Público providing views on this subject, particularly focusing on the lack of gravitas of this precedent for future debt restructurings. He was later interviewed by the Portuguese magazine Negocios to discuss the latest developments in sovereign debt litigation. The main issues discussed were the implications of the recent US Supreme Court decisions for future sovereign debt restructurings and possible consequences for Europe.

He also spoke with Infobae TV in Argentina about the next steps that should be adopted to settle with creditors and avoid a default on Argentina's external debt obligations.