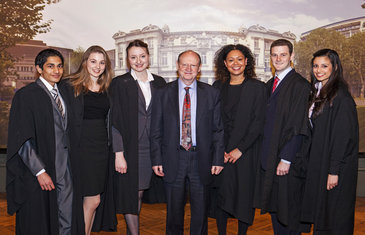 The Grand Final of the School of Law’s annual mooting competition – a contest designed to give undergraduates the closest experience to appearing in the Supreme Court – was held on 21 March 2013.

The four students who successfully progressed through six rounds to compete in the final of the George Hinde Moot were Samir Amin, Kimberley Blackwood, Anna Jones and Travis Robertson. The final was won by Anna Jones and the first year cup was awarded to Travis Robertston.

Students, faculty, alumna and guests attended the moot final, which was held in the Octagon at Queen Mary, University of London. The moot, which was based on administrative law principles, was judged by the Rt Hon Sir Stanley Burnton, a former Lord Justice of Appeal.

The George Hinde Moot competition has been established for over 40 years. This year more than 150 law students took part in the competition, tackling moot problems in criminal law through to contract law and overseen by student Moot Masters Tania Rahmany and Jocelyn Smelt. The semi finals were held at Snaresbrook Crown Court  and were judged by HHJ Freeland and HHJ Sanders.

Professor Valsamis Mitsilegas, Head of the Department of Law, said:

"The George Hinde Moot Competition gives our students a uniquely challenging insight into advocacy and the bar with invaluable support and reassurance from law lecturers Stephen Allen and Margaret Cunningham.”

Margaret Cunningham, Law Lecturer at Queen Mary, who, along with Stephen Allen, coordinated the internal moot competition said:  “The quality of our student mooters is outstanding, and they are all to be praised and admired for their dedication, hard work, and genuine passion for advocacy.”

Next year’s competition will be overseen by Moot Masters Theodore Dyson and Anna Jones.