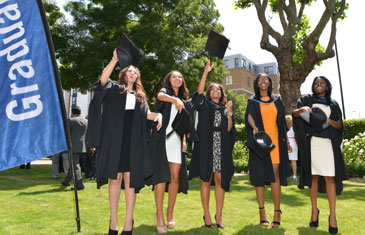 Students from the School of Law were awarded their degrees on 15 July 2013 at the ceremony held in the Great Hall in the People’s Palace at Queen Mary, University of London.

Head of the Department of Law, Professor Valsamis Mitsilegas said: “We wish our graduates all the best for the future and thank them for their valuable contribution to the School of Law and Queen Mary. Graduation is a celebration of our students’ achievement and marks the start of a new journey, moving either to further study or future careers. We hope that our alumni will stay in touch and continue as ambassadors for the School of Law.”

Each year prizes are awarded to first, second and final year undergraduate students in recognition of academic performance, with final year students receiving their prizes at the Graduation Ceremony. This year a total of 21 prizes will be awarded to students, four Department of Law prizes, seven Queen Mary College Prizes and 10 sponsored prizes from organisations such as Dechert, Old Square Chambers and Herbert Smith Freehills.

Professor Mitsilegas added: “We’re all very proud of the high standard of achievement in 2013 and congratulate the students who, against tough competition, have gained these prizes.”