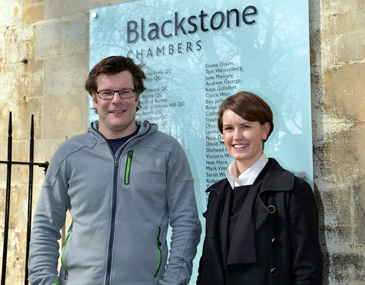 The essay topic was ‘When, if ever, should the ordinary demands of a fair trial give way to the needs of national security by the use of a closed material procedure?’

Tom de la Mare QC, Blackstone Chambers, judged the competition and said that he was very impressed with Charlotte’s essay, particularly as she is a first year student and has not yet covered the topic in lectures.

Charlotte spent three days in February at Blackstone Chambers under the supervision of three junior tenants. This gave her the opportunity to try her hand at their work, which included reviewing the instructions for a current dispute. She was also very fortunate to meet with Anthony Peto QC to discuss the latest amendments to the Justice and Security Bill. On her final day she attended a case at the Supreme Court with two counsel from Chambers who were representing the Ministry of Defence.

Charlotte said: “Overall this was a wonderful opportunity which undoubtedly gave me a much stronger understanding of the varied work of a barrister.”