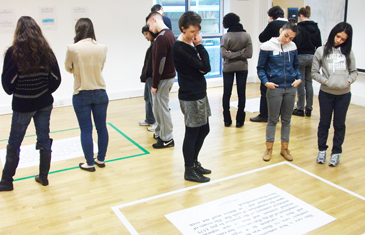 The School of Law held two pilot workshops in February to develop students’ legal reasoning skills by drawing on resources from the visual and dramatic arts. The workshops were funded from Queen Mary’s ‘Westfield Fund for Enhancing Student Experience’.

Twelve undergraduate students took part in the workshops, the first of which focused on exploring the facts of the case, while the second focused on the ‘ratio decidendi’ (the reason for the decision).

Dr Maks Del Mar, Lecturer in Legal and Social Philosophy at QM’s School of Law, designed and facilitated the workshops with Ms Alicja Rogalska, visual artist and an educator at the Tate Gallery, and Ms Jacqueline Defferary, theatre and television actress and drama teacher.

One of the students who took part in the workshops said: "I think one should leave university being able to work in teams, being able to speak publicly, having an open mind to different ways of doing things, and being able to assume leadership. This is in addition to having a solid academic grasp of one’s discipline. These activities encouraged all of the former skills, as well as encouraging greater engagement with, articulation of and thus understanding of the law."

Dr Del Mar presented the initial findings of this research project at the Law, Culture and Humanities conference, held at Birkbeck College, University of London, on Friday 22 March 2013. His presentation was entitled: ‘How to Read a Case: Two Workshops’. The presentation was part of a panel entitled ‘The Arts and Legal Reasoning.’ The PowerPoint presentation is available by request.

The first workshop’s learning outcomes were:

The associated activities included: reading excerpts of the case out loud, being given props and asked to consider what impact this has on the story of the case, drawing up cast lists of characters in the judgement, and imagining a character mentioned in the facts in more detail.

The second workshop’s learning outcomes were:

Related activities included: cutting out candidate ratios, acting as a clerk to an imaginary judge who demands the inclusion of a new fact into a draft test, and choosing and defending an island that corresponded to a category for understanding the case that one found persuasive. A picture of the ‘Choose Your Island’ activity is depicted here.