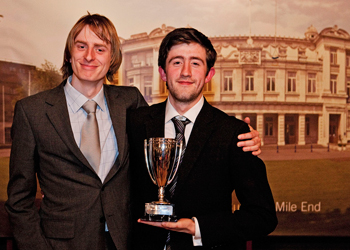 Law students from Queen Mary, University of London proved their excellent advocacy skills against universities across the UK and Ireland to win an international moot court competition.

This is the second year in a row that a Queen Mary team has won the Thomas A Finlay Moot Court Intervarsity competition, which is hosted by University College Dublin.

Both teams acquitted themselves admirably and were in contention for the semi finals. Mr Hexter and Mr Windle defeated the National University of Ireland, Maynooth in the semi-finals and went on to beat the University of Sussex team in a final that was judged by Irish barristers and Justice Laffoy of the Irish High Court.

“The team members displayed fantastic advocacy skills and conducted themselves with the utmost decorum and dignity. They are a true credit to the School of Law and to themselves. I was told by the judges on several occasions after the competition that all members of our team impressed with their oral advocacy and ability to assimilate Irish law rapidly while on their feet.

“Not only was the competition itself a great experience but the four of us enjoyed each other’s company through the whole trip and when we weren't mooting we were having a good laugh together. I would thoroughly recommend mooting not only for developing skills necessary for a professional career in the law, but also for the social aspect that comes with it.”

The areas of law mooted on were:

The Thomas A Finlay Moot Court Intervarsity is an international moot court competition hosted by University College, Dublin. The competition takes place over two days with a number of preliminary rounds followed by a ‘break’ to semi-finals, when the competition reverts to a knock-out format. The grand final is chaired by a senior member of the British or Irish judiciary. Success in this moot competition follows Queen Mary’s recent victory in the London Universities Mooting Shield (LUMS) Competition held on 15 March 2012.