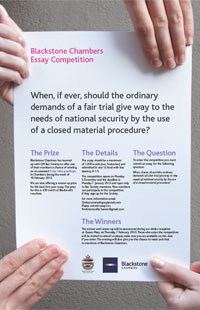 Queen Mary’s student Bar Society has teamed up with Blackstone Chambers to offer students the chance to win a mini-pupillage.

The essay competition, which is open to Queen Mary undergraduate students, asks ‘When, if ever, should the ordinary demands of a fair trial give way to the needs of national security by the use of a closed material procedure?’

Kristine Moeller-Jensen, Vice President of the Bar Society, said: “It’s a broad topical question with an interesting political angle, which we hope will inspire some good entries.’

The mini-pupillage will allow an undergraduate student to gain experience by shadowing barristers in chambers and in court.

Kristine added: ‘We hope that lots of people will enter as it’s such a good opportunity and there’s a runner-up prize for the best first year essay.’

About the Blackstone Chambers Essay Competition

Blackstone Chambers has teamed up with QM Bar Society to offer one of their members a chance of winning an un-assessed 3 day mini-pupillage in Chambers during the week of 18 February 2013. We are also offering a runner-up prize for the best first year essay. The prize for this is £50 worth of Blackwell’s vouchers.

The essay should be a maximum of 1,800 words (exc. footnotes) and submitted in size 12 Arial with line spacing of 1.5.

The competition opens on Monday 3 December and the deadline is Monday 7 January 2013 and open only to Bar Society members. Non-members can participate in the competition if they sign up for the Society.

To enter the competition you must submit an essay for the following question: When, if ever, should the ordinary demands of a fair trial give way to the needs of national security by the use of a closed material procedure?

The winner and runner-up will be announced during our drinks reception at Queen Mary on Thursday 7 February 2013. Those who enter the competition will be invited to attend so please make sure you are available on this date if you enter. The evening will also give you the chance to meet and chat to members of Blackstone Chambers.