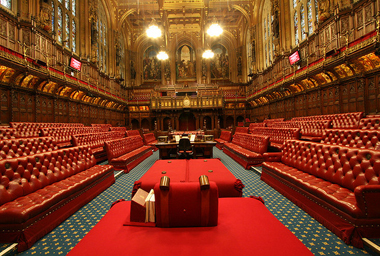 Six law students at Queen Mary have joined academics, MPs and democracy campaigners in presenting evidence to the body scrutinising plans for a major reform of the House of Lords.

The students’ written memoranda look critically at different aspects of the government’s proposals for reform to the second chamber of UK Parliament. The evidence was presented to the Joint Committee on the Draft House of Lords Reform Bill as part of its ongoing inquiry into the future of the House of Lords. The Committee’s full report was published today (Monday 23 April).

The students gave permission for their memoranda to be submitted, after all achieved first class marks for the work. They were put forward by Queen Mary Professor of Public Law, Andrew Le Sueur, who has served as an adviser to Parliamentary Select Committees, including a period as legal adviser to the House of Lords Constitution Committee (2006-09).

Hélène Tyrrell, Teaching Associate on QM’s Public Law module, comments: “Reform of the House of Lords is a topic of great constitutional importance. Members perform a crucial role in law-making, providing a balance to the work of the House of Commons by scrutinising and amending legislation. The Government has placed the House of Lords on its agenda for reform, reigniting debates about whether its members should be appointed or elected (or a mixture of both).

“Understanding both sides of the debate is key to understanding the delicate constitutional balance in the UK. Our students have not only studied this debate, but have been given the opportunity to engage with it. Publication of the written memoranda is a note-worthy addition to our students' CVs and a great achievement so early on in their studies.”

Key themes throughout the memoranda were the importance of an independent and more democratic House that can relate to, and be held accountable by, the general public. The Committee’s report references student Daniel Shintag’s suggestion that the House should contain fewer than 300 members.

In her memorandum Cecilie Rezutka encouraged both gender and ethnic diversity to increase public identification with the Chamber, and advised a minimum age of 35 years for Members to “to maintain the Chamber’s high level of expertise and independence”.

Iulia Miruna Anghelescu highlighted the difficulties faced by consecutive governments aiming to reform the House of Lords over the past century, adding that “whatever the course of action might finally be, I am of the opinion that the Lords should preserve their main function as a chamber of experts, for that is most relevant contribution they can make to Parliament”.

Written evidence received and accepted by the Committee as evidence for its ongoing inquiry into the Draft Lords Reform Bill can be read here, with the submission by Queen Mary’s law students appearing on pages 117 – 128: http://www.publications.parliament.uk/pa/jt201012/jtselect/jtdraftref/284/284iii.pdf

Read the full article on the QM Media Centre.