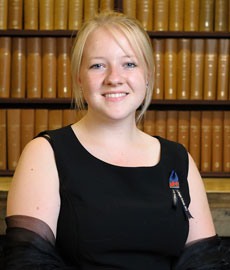 Camilla Barker, an alumna of Queen Mary, University of London, has received a Fulbright Postgraduate Student Award to enable her to study at Harvard University on one of the most prestigious and selective scholarship programmes operating world-wide.

Camilla studied at Queen Mary, University of London and l’Università di Bologna, Italy, for her LLB English and European Law degree. She graduated in 2012 with First Class Honours.

At Queen Mary, Camilla successfully re-launched, managed and edited the Queen Mary Law Journal whilst maintaining a heavy involvement in women’s football and other student societies. On her Erasmus placement in Bologna, Camilla achieved grades of 100% cum laude in her Laurea Magistrale (Master of Laws) courses and during this time also published two books on subjects of international human rights law. Outside of university, Camilla is the founding director of a charitable publishing house which has attracted attention worldwide for its pioneering work in human rights literature. She also volunteers for the British Red Cross and is a keen sportswoman.

As a Fulbright scholar, Camilla will study the LLM (Master of Laws) specialising in International Human Rights Law at Harvard Law School. Commenting on receiving the award Camilla admitted that it is ‘an achievement which both inspires and somewhat overwhelms.’

Camilla’s work at Harvard will focus on issues of international humanitarian law, capital punishment (she expects to be assisting and representing “death row” inmates in US states like Texas and Louisiana); and gender violence. Camilla describes her passion for human rights and suggests that in the UK, we often take human rights for granted and rarely acknowledge their importance.

‘The mere fact that you can read a newspaper without being arrested, show your political affiliation without being kidnapped or take your children to school without being bombed or shot at is not a democratic convenience of living in Britain; it is the result of decades, if not centuries, of human rights activism which pushes political parties into enacting legislation to protect the UK’s citizens,’ she said.

Not every country in the world enjoys the same level of rights and liberties as the UK and Camilla is keen to contribute to rectifying this problem.

‘Friends and family joke that Harvard will now be getting a real version the enthusiastic blonde lawyer at the heart of the “Legally Blonde” films,’ said Camilla. ‘Despite her somewhat eccentric character, I’m taking that as a compliment!’

The Fulbright Commission selects scholars through a rigorous application and interview process. The Commission looks not only for academic excellence but a focused application, a range of extracurricular and community activities, demonstrated ambassadorial skills, a desire to further the Fulbright Programme and a plan to give back to the recipient’s home country upon returning.