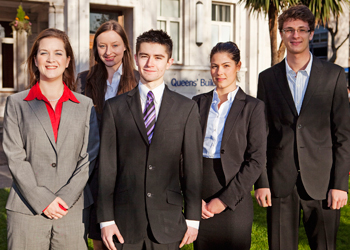 The Queen Mary Bar Society is a student group that aims to help students who want to become barristers. We asked Gianni Sonvico, President of the QM Bar Society, to reflect on the last year and tell us about the highlights:

The beginning of the academic year is always our busiest month as we have to recruit our new committee and members. We were lucky enough to be inundated with applications and put together a really strong team of new committee members.

Our first term of events kicked off in the first week of October with a lecture by James Wakefield, head of Kaplan Law School, on what qualities a prospective Barrister should have and how the BPTC postgraduate qualification works. We then took a group of students to the Old Bailey to witness, first-hand, the quality of advocacy at the Criminal Bar.

In November we held our flagship panel/networking event which comprised of a Q&A session including some genuine luminaries of the Bar, as well as junior counsel. The event included a reception that allowed our members to spend time with the Barristers in a more informal environment. Also in this month we were able to host an advocacy workshop run by the College of Law which our members, in particular the mooters, found very informative.

Before breaking for Christmas we visited Kaplan Law School to hear a talk on building a legal CV. This is a massive bonus for our students and has consistently seen an upturn in successful applications. Finally, we joint-hosted our Law Department’s Christmas party, which gave everyone a chance to let their hair down!

We started the second term with a trip to the UK Supreme Court which was particularly relevant to first year students who were studying the court and its implications that term.

We were lucky enough to begin February with a visit from Attorney Jeffress, an eminent American prosecutor who is currently working at the US Embassy. She offered a fascinating insight into practising in America and the differences between our respective legal systems. We also held a panel event with a range of speakers who had not taken conventional routes into the Bar. This proved helpful to non-law students and those on the senior status course.

Our final event of the academic year was a highly stimulating debate on the death penalty. This event was both well attended and thoroughly competitive, due, in part, to the high quality of speakers.

Gianni Sonvico graduated with first class honours this summer and is currently on an internship with the British Institute of Human Rights before starting his BPTC at Kaplan Law School. Gianni hands over to Holly Thomas, who will be President of the Bar Society for 2012-13.