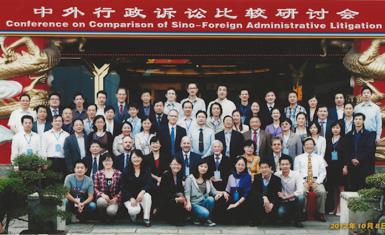 Professor Andrew Le Sueur took part in an expert panel discussion in Wuhan, China on administrative law litigation. Organised by Erasmus University China Centre and Wuhan University, the conference included wide-ranging discussion between the panel of European experts and Chinese academics and judges on the judicial review principles and procedures, the rule of law and judicial independence.

The Administrative Litigation Law adopted in China in 1989 was a step forward in subjecting executive bodies to judicial control but it is now widely accepted that amendment is needed. The recent State Council white paper on Judicial Reform in China calls for reform that ‘draws on the sound practices of other countries but does not blindly copy them’.