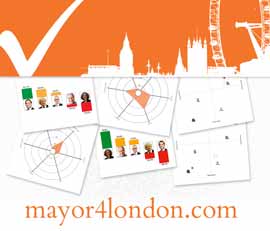 Londoners can find out which mayoral candidate they are politically-aligned to with a new online tool developed by researchers at Queen Mary, University of London and the London School of Economics.

With Mayor4London.com, each user answers a series of questions on policy issues being debated in the run-up to the election, such as crime, education, welfare and transport. The process takes just a few minutes to complete.

The application then analyses how closely a person’s responses overlap with the policies of Ken Livingstone, Boris Johnston and other candidates vying for election victory on 3 May.

Designed by Dr Mario Mendez, from the School of Law, at Queen Mary; Dr Nick Anstead, in the Department of Media and Communication, at the LSE and Dr Jonathan Wheatley at the e-Democracy centre, University of Zurich, the tool aims to fend off voter apathy.

“This is a closely fought and important mayoral election, and the tool has the potential to raise awareness among Londoners of the candidates’ main policies. If there is more voter engagement, more people may head to the ballots as a result,” explains Dr Mario Mendez, a constitutional law expert at QM.

User results are displayed in three graphs, plotting how closely users match candidates on policy statements and themes such as crime, transport, society, education, welfare and mayoral powers. Another graph pinpoints whether a user is more closely aligned to the ‘left’ or ‘right’, depending on their answers on issues of the economy and social values.

Dr Nick Anstead, from LSE, adds: "The Mayoral election is in two rounds which require citizens to have a more in-depth knowledge of more candidates than they would in a normal parliamentary election. Hopefully this application will help voters understand key election issues and where candidates stand on them."

The anonymous results will be used by the research team to map the ideological profile of London voters, examining how their political ideology affects their voting intentions and their reasons for choosing a particular candidate.

The i-frame code is available for any organisation wishing to run the application on their website: see the FAQs at http://www.mayor4london.com)